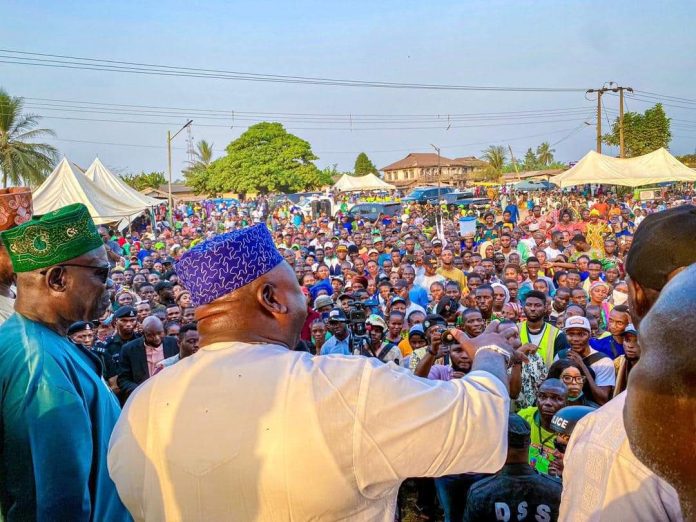 The Governorship candidate of the Peoples Democratic Party (PDP) in Ogun State on Monday took his campaign tour to Ijebu East Local government area of the State with a vow to reposition the economy of the State.

Adebutu who was accompanied by the State Chairman of the party, Hon. Sikirulahi Ogundele and other leaders of the party visited Ijebu-Ife, Ogbere and Ajebandele ward in J4 area of the local government area.

Adebutu while addressing thousands of PDP members and supporters said if voted as the Governor of the State, he would turn the State into investment destination of West Africa.

He said, his administration would facilitate power generation and distribution with special focus on industries and Small and Medium-sized Enterprises (SMEs) development.

This, according to him would guarantee thousands of Jo opportunities for the teeming unemployed youths in the State.

Adebutu said, “As young people, my first priority is to make sure that you get jobs and the only way to get jobs for you is to create wealth.

“I must make businesses prosper and to do this, we must give uninterrupted electricity for business owners and industries to thrive.

“When we give uninterrupted electricity, businesses will prosper and we would have created enabling environment for businesses to prosper”.

Adebutu said it was shameful and regrettable for any responsible government to sack members of his staff without any justification.

He however assured the lecturers that if voted into power as the governor of the state, he would not only pay their entitlements, but also reinstate them.

It would be recalled that, Dapo Abiodun – led administration had in May, 2022 suspended 27 lecturers of the institution for allegedly protesting the non-payment of their 74 months salaries and arrears.

The aggrieved lecturers, under the aegis of “Coalition of TASCE staff” had been battling the state government over their unpaid arrears and payment of half salary.

Some of the lecturers were arrested in 2019 for allegedly disrupting the matriculation ceremony in the institution under the guise of protesting non-payment of their salaries and arrears.

They were later arraigned before an Ogun State Magistrates Court for alleged robbery, assault and others.

But, respite has come for the lecturers as Adebutu has commenced the payment of a monthly stipend of N100,000 each to them.

Confirming this to journalists in an interview on Monday, the Chairman of the Coalition of TASCE staff, Dr. Daniel Aborisade said, the 27 affected lecturers have so far been paid four months stipend by Adebutu.

Aborisade accused the Abiodun – led administration of arresting, persecuting and unjustly sacking them in a bid to denied them their entitlements.

“I used to work in Tai Solarin College of Education (TASCE), Omu Ijebu and I was the chairman of Coalition of TASCE staff, the movement that fought for the emancipation of the entire staff of TASCE when Amosun and Daniel governments owed us 74 months salaries and arrears.

“We stood our ground and fought for the emancipation and before Amosun left, we had understanding with the NLC President, Comrade Ayuba Waba that before the expiration of his term he will pay us 35 months of the the 74 months being owed, but low and behold, he failed.

“And when Dapo Abiodun was coming in, we worked with him, had a good relationship with him with the promise that he will offset the said amount, but immediately he emerged, he turned against us, he brought up charges against us all in a bid not to pay the salaries and up till now, way back May 11, 2020, we have been suspended from work for no just reason and up till now, we are still facing some criminal charges as a result of Dapo Abiodun’s lies against us.

“The government sacked us unjustly just because we were fighting for our right. We came to Adebutu for assistance and he has alleviate our suffering.

He (Adebutu) invited us for a chat, we discussed and he directed our issue to the legal department of his campaign team and after two months we were invited and we were told that we have a very good case based on that, he promised that if he emerged he will return us to work and being a philanthropist he has placed us on a monthly stipend.”