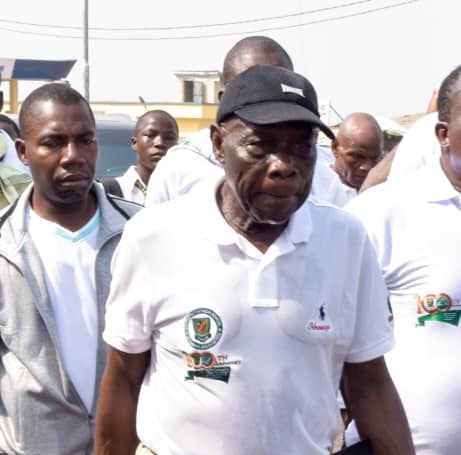 Former President, Chief Olusegun Obasanjo shook Abeokuta, the Ogun State capital to its foundation, as he led current and old students of Baptist Boys High School (BBHS) Abeokuta on a 18km walk around the town as part of the centenary celebrations of the school.

Obasanjo who was joined by the leadership of the old boys association, led by the National President, Prof. Kayode Oyesiku and large numbers of the current students entertained residents, motorists and passers-by on the walk.

A statement by his Special Assistant on Media, Kehinde Akinyemi stated that hundreds of residents and enthusiasts echoed and praised Obasanjo’s names for his prowess, energy and endurance to embark on the walk despite his age.

Among those who played host to Obasanjoand his team, were the Olu Ibara of Ibara, Oba Jacob Omolade, former Finance Minister, Onolapo Soleye and the Alake of Egbaland, Oba Aremu Adedotun Gbadebo. It was at the visit to the Palace of Alake, that some aged old school mates joined them.

They walked amid singing of the school anthem among other songs, through Oke Egunya, Igbore, Oke Igbein, and at Omida the palace of Oba Omolade.

Thereafter, the walkers moved to the Ibara Housing Estate, the residence of Soleye. Subsequently, the team took the walk again to Ake, the palace of Oba Gbadebo.

Shortly after the visit to Alake, the octogenarian still burstling with energy entered back on the road and headed towards Saje, a journey that took them through Isale Ake, Adatan, Kugba Road before entering the rehabilitated Saje Road into the School premises.

Oyesiku disclosed that the walk covered 18km stretch when added together, as he commended the for school boy for spirit behind the centenary annivesary exercise.