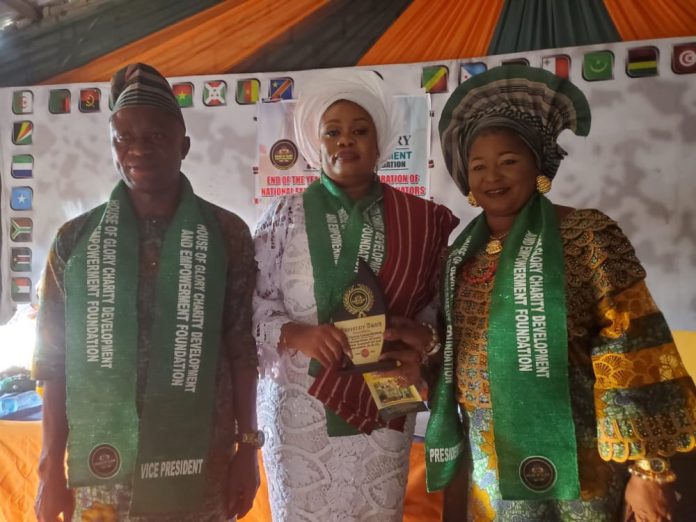 The award was bestowed on her at a well-attended and colourful ceremony to mark end of the year party/inauguration of National Executive and State Coordinators with award of excellence, organized by the House of Glory Charity Development and Empowerment Foundation held in Sango Ota area of Ogun State.

Hon. Akinrinde was honored among 41 other recipients who were conferred with different honourary awards in recognition of their great support to their reputable group and community at large.

The ADC Candidate who was also the “Mother of the Day” is known to be a woman with consistent and meaningful participation in community development, someone who has never get tired in rendering unsolicited, selfless and philanthropic services to humanity despite not holding any political office yet.

While receiving the award, the leading Reps Candidate, Hon. Akinrinde dedicated the award to Almighty God and the good people of her constituents saying that she was delighted to receive the honour.

Hon. Akinrinde therefore used the medium to solicit for their support and votes during the coming general elections promising that if she emerged, she will not hesitate to sponsor any empowerment or program organize by the House of Glory Charity Development and Empowerment Foundation.

She therefore appreciated the organizers of the event who have so generously and gratuitously deem it fit to conferred her with the honour.

On her part, the group coordinator Amb. Dr Oke Modesola Olaronke revealed that the foundation has been on existence for the past three years and it has recorded a great achievement within the period.

Dr. Olaronke hinted that the Foundation was founded to empower the needy, widows and to assist the members of the group in one way or the other.

She therefore thanked all the awardees for their exemplary and impactive contributions to the development of the nation and community they represent.