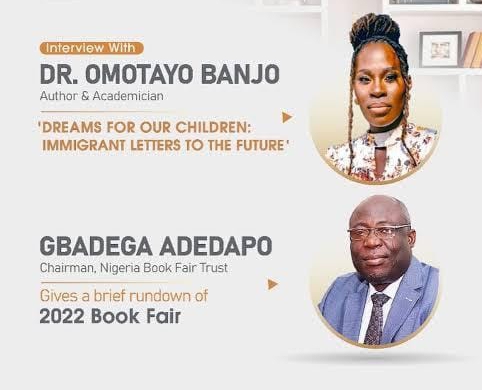 The author of the award winning book, Dreams for Our Children, Dr. Omotayo Banjo has disclosed that her book was to correct the erroneous belief that immigrants in US are fraudulent.

She disclosed this in an interview with Channels television.

Dr. Banjo who is the first daughter to the former Ogun State Gubernatorial Candidate, Ogbeni Lanre Banjo, said many international societies believe that immigrants are ruining their system, a situation, she described as untrue, insisting that immigrants have stories beyond the negative beliefs.

She stressed that the immigrants helped the advance countries to build their societies.

Speaking about the book and what inspired “Dreams For Our Children”, the author hinted that so many things inspired it and the vision of the book was To Be Able To Capture The Hopes Of Immigrants.

The author who spoke on channels television said her book was to correct the erroneous belief that immigrants are unscrupulous.

“Dream for our children” was selected to be one of the 20 best books of the year along with the books written by the following great Nigerian writers. “Becoming President of Nigeria” by Onyibe Magnus. ” l am because we are” by Chidiogo Akunyili-Parr, a book written by the daughter of Professor Dora Akunyili, OFR who was the Director-General of National Agency for Food and Drug Administration and Control of Nigeria among others.

According to her “So many things inspired it and the vision of the book was To Be Able To Capture The Hopes Of Immigrants. In general but especially here in the US against the background of a narrative at a time that continues but in 2016 when Trump won the election there was a lot of anti-immigrant sentiment so there’s a lot of lead about immigrants sort of tearing down this country and I wanted to capture the stories of everyday people who leave their countries to find some kind of respect to find something for their family to do something for their children.”

“I wanted to be able to capture the heart of that story and I was also inspired by many immigrants that we see on screen people like Ivan orji who is from Nigeria who are creating space using film and television or music to say we are here and we are contributing to labour market we are contributing to the culture.”

“So I wanted to capture those story and say that immigrants had a place here they have a story that goes beyond the belief that they are stealing jobs they are ruining society that’s not true. That was the motivation behind the book”

While answering question on a country like the the united state which was built by immigrants, she said it was regrettably that many Americans see America as a white country but the truth is that the immigrants built the country.

Her words “it’s interesting because as you said this country was really built was founded or not founded but Immigrants came here as Africans help built this country and it’s interesting because right now I don’t know if you heard of the bait of a critical race theory which is a theory that talks about how we came to be in this place where we are questioning institution play a role in our understanding in race in which our ideology in how we understand one another, So I will say we got to this place because there’s a lot pushback against this kind of education teaching actually what happened, teaching about enslaved African.

“For example there’s a bill of proposition now in Texas they want to change a language from African were slave or enslaved to Africans came to work, they decided that let me go on board to work for some country and the beating and be treated without respect so they are changing the language and they are trying to change the story.”

“As it is now unfortunately too many Americans see America as a white country but the truth is that the immigrants built the country not only the structure and the culture that people love to dance to that goes around the world came from people of color in this country and so I wanted to capture their story not just their story not just brown people but all of our stories because I wanted us to see how connected we really are.”

While speaking on the contents and structure of the book, Dr. Banjo disclosed that it was a collection of letters from people around the country.

She also positioned that the book is into generational because the experience of her parents is not her experience likewise wouldn’t be the same as her daughter.