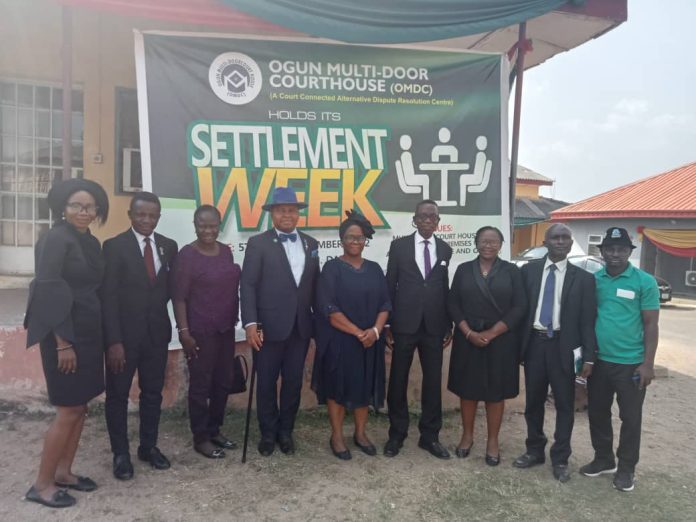 Olugbemi made the call at the closing ceremony of the Settlement Week of the Ogun Multi-Door Court (OMDC) held on Friday in Abeokuta and solicited the partnership of INEC in speedy resolution of political disputes.

“Conflicts are natural part of elections, so we are urging INEC and lawyers to collaborate with the OMDC in bring any election related disputes for resolution in order to promote peace and harmony,” he said.

The chairman said that OMDC treats all kinds of cases apart from felony, which carries capital punishment and divorce cases.

Speaking on the settlement week, he said that the five-day programme from Dec. 5 to Dec. 9 was organised to sensitise the public to the mandate and functions of the court and its benefits.

He said that during the settlement week all cases brought were registered free of charge, adding that within the week over 60 per cent of disputes that were heard were resolved amicably.

Olugbemi explained that the Ogun Multi-door Court was a multi-faceted dispute resolution centre with an administrative structure where disputes could be efficiently addressed through ADR mechanism best suited for the parties and issues involved.

“The Multi-Door Court supplements litigation by providing additional doors towards a faster, cost-effective and user- friendly access to justice,” he said

The chairman thanked the Ogun State Chief Judge, Justice Mosunmola Dipeolu, for her support and other stakeholders for working assiduously to make the settlement week a success.

He also urged the people of Ogun to patronise the OMDC in resolving disputes related to contract, breach of agreement, cases of landlord and tenants, and criminal matters which are not felony in nature.

Mr Olusegun Ogunyannwa,the president of the Mediation Training Institute of Nigeria (MTI) noted that the Multi-Door Courthouse is a one -stop shop for dispute resolution.

Ogunyannwa said that the Multi-Door Court has five centres in Ogun located in Ijebu-Ode, Abeokuta, Sagamu, Ota, and Idi-Oke/Igbesa

He said that the establishment of the OMDC was to ensure speedy dispensation of justice through ADR mechanism and also to bring justice closer to the people.