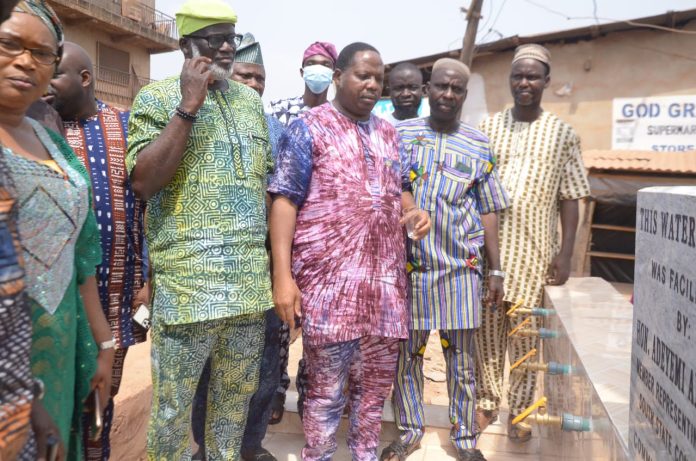 The Speaker of the Ogun State House of Assembly, Rt. Hon. Olakunle Oluomo has inaugurated three different water projects facilitated by a member representing Abeokuta South II State Constituency, Hon. Ademuyiwa Adeyemi in line with his promise to the people.

The projects inaugurated were three set of bore holes meant to supply pipe-borne water which he facilitated for the benefit of his constituents for the legislative year.

The water projects, which were his constituency projects and were commissioned by Rt. Hon. Oluomo in company of other eight lawmakers at different points at Kemta- Kobiti, Oke-Bode and Ago-Ijesa at in Abeokuta South II were initiated and completed based on the needs assessment basis of the benefitting communities.

The Speaker, who commended the selflessness, vibrancy and quality representation of Hon. Adeyemi in all his legislative activities, added that the water projects were well conceived at the right time for the right communities.

He further tasked the communities on effective maintenance culture and protection of the projects, with a view to enabling the projects serve the purpose for which they were initiated.

In his remarks, the projects facilitator, who is a member representing Abeokuta II State Constituency, Ademuyiwa said the projects were in addition to the numerous other self financed projects and empowerment programmes he had initiated in giving back to his constituents who entrusted him with their mandate.

He stressed that the timely delivery of the water projects, which remained pivotal in daily human existence and activities was in fulfillment of his promise to the benefiting communities.

Speaking on behalf of the community, the Vice-Chairman, Ago- Ijesha Community Development Association, Mr. Olalekan Kilasho appreciated the lawmaker for facilitating the projects, commending him for improving the living conditions of the people in the community.