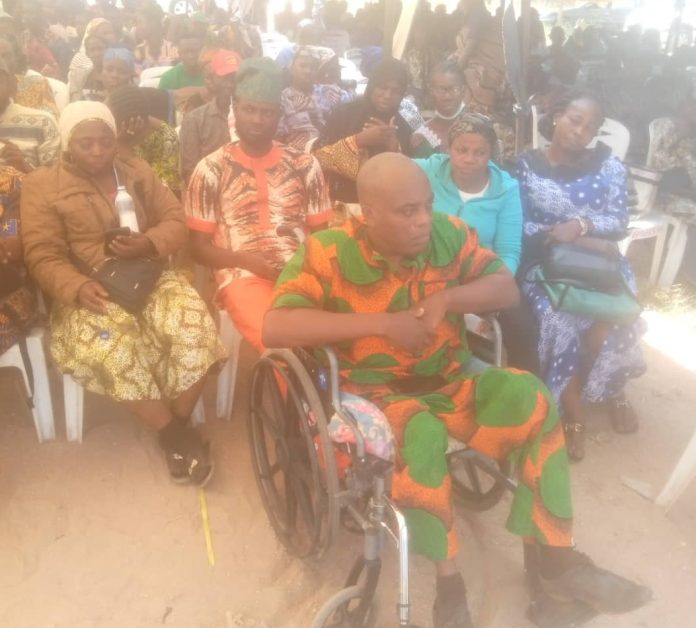 The Leader of Joint National Association of Persons Living With Disabilities (JOAPWD) in Ogun state, Comrade Adebisi Abiodun Abacha has accused Gov. Dapo Abiodun’s administration of neglecting the plight of persons with disabilities in its programmes and policies.

Abacha disclosed this on Thursday in Abeokuta during Year 2022 International Day of Persons With Disabilities organized by the state government.

The programme is with the theme : “Transformative Solution for Inclusive Development: Role of Innovation in Fueling an Accessible and Equitable World”.

He tasked Abiodun to implement Persons with Disabilities law already signed in December 2017 by his predecessor, Sen. Ibikunle Amosun.

He called on the state government to be proactive and put in place measures that would improve the living conditions of persons with disabilities.

He, however, expressed displeasure over incessant change of date of the event, saying that the organizers had not considered the stress they passed through.

“Look at this place, it is not conducive for persons with disabilities most especially those of us using wheelchair.

” For us to achieve goal 1, goal 2, goal 4, goal 5, goal 8 and goal 10 in sustainable development growth, the government has to take us along; they should not leave us behind,” he said.

“On August 17th, 2017 Ogun State House of Assembly passed the law of persons with disabilities.

” On December 27th, 2017 Gov. Ibikunle Amosun signed it in to law. But since Dapo Abiodun has came in, he did not implement the disability law.

” Oyo state just passed their own last year and the law start working in Oyo state. We should not talk about Lagos. Lagos has commission for persons with disabilities and it is working very well.

“We could have boycotted the event but due to the respect we have for the governor and for the commissioner we said let us just relax our grievances because if we want to come out or demonstrate, it will not help the government.

” Again, before the implementation of the bill, we don’t want to be rehabilitated again we want a department for persons with disabilities in the commission,” he concluded.

The Commissioner for Women Affairs and Social Development in the state, Hon. (MRS) Olufunmilayo Efuwape , noted that the state government would continue to do its best in ensuring that persons with disabilities lived a normal life.

“Standing in defence of human right for all, including person with disabilities is one of our most important shared priorities, not just by the state government, but by residents seeking to shape a better and more inclusive future for themselves and their families.

“The effort of government at identifying and recognizing more clusters of disabilities with the view of providing them with appropriate assistance is another way to enhance the well being of these people.

“As a government, we are resolute in our commitment to recognizing the potential of all people, particularly people with disabilities which is in line with international best practice.

” It should be noted that since the inception of this administration, the ministry has facilitated training of 15 visually impaired persons at the Farm Craft Centre for Blinds, Isheri-Olofin Lagos State. These set of people had been empowered to function effectively in the society after completion of their training,” she added.

Earlier , the Permanent Secretary Ministry of Women Affair and Social Development, MRS. Melutia Ogunremi made it cleared to the persons with disabilities that, they were not left behind with the progressive move geared towards their betterment.

He assured that there would be an aggressive improvement in the socioeconomic status and well-being of persons with disabilities, most especially with the degree of inclusion extended to the group in the state.

The Chairman of Joint National Association of Persons Living With Disabilities (JONAPWD) in Ogun state, Dr. Michael Ebohan highlighted all the challenges being faced in the state, and implored the government to create enabling environment for them.

The chairman of Spinal Cord Injury Association of Nigeria (SCIAN), Comrade Ayodele Awobona urged the state government to make persons with disabilities’ law to be a reality and department of disability should be established, especially persons with Spinal Cord.

Highlight of the event was presentation of Aids and Appliances/ Empowerment items by the state government.