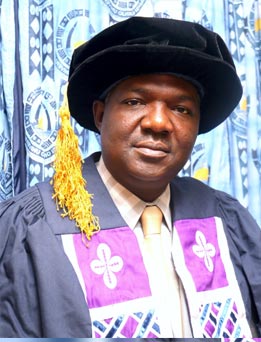 Today January 21, 2023 marks exactly 100 days since Professor Ayodeji Olayinka Johnson Agboola formally took over the mantle of leadership as the Vice-Chancellor of Olabisi Onabanjo University (OOU), Ago-Iwoye. A Professor of Cancer Pathology and proud alumnus of the University, Agboola was appointed the 11th substantive Vice-Chancellor, succeeding Prof. Ganiyu Olatunji Olatunde on October 13, 2022 and opening a new chapter in the chequered history of this foremost institution.

Although it might be too early to measure the prospects of his leadership or benchmark his performance as VC, Prof. Agboola has practically left no one in doubt of his commitment to consolidating on the legacies of the past and repositioning the University for global competitiveness within the short time in the saddle. This, perhaps, is evident in the zeal and sense of purpose with which he has hit the ground running since assumption of office and established a clear policy direction to the admiration of stakeholders in the University Community.

At this auspicious moment, it does appear the University was primed for double celebration because the marking of Prof. Agboola’s first 100 days in office coincides with the 40th anniversary celebration of OOU which kicks off by the end of January 2023. Who wouldn’t rather be proud of these amazing milestones?

On July 7, 1982, the institution was founded as Ogun State University (OSU). But the varsity made history on January 31, 1983 when its doors were opened to its first set of students who were a little over 500. From such humble beginning, the flagship institution pioneered university education in Ogun State and has since grown in leaps and bounds, paving the way for the state’s phenomenal growth as Nigeria’s education capital with 26 tertiary institutions so far.

It is instructive to note that the University was conceived as a multi-campus institution with the Main Campus in Ago-Iwoye, and other campuses located in Sagamu, Ayetoro and Ibogun. This multi-campus model was not only to accommodate the cultural diversity of the host state but also to increase access to education and drive students’ enrolment growth.

In 1995, the University moved to its permanent site from the Mini Campus in Ago-Iwoye and on May 29, 2001, it was renamed in honour of late Chief Olabisi Onabanjo, whose efforts as the first Civilian Governor of Ogun State (1979 – 1983) gave birth to the institution.

Over the years, OOU has emerged as one of the most prominent universities in Nigeria and most remarkably, a University of First Choice for candidates seeking admission. It has successfully evolved with various academic programmes, research activities and services to the society which have firmly established it as a true citadel of academic excellence.

With three Colleges, 13 Faculties, 53 Departments and 75 academic programmes across its campuses, the University can currently boast of a student population of over 40,000 in full time, part-time and postgraduate programmes.

Many more hundreds of thousands have graduated from the University, among whom are revered icons in legal practice, medical profession, administration, education, banking and finance, commerce, engineering, science and technology, entertainment, sports and other distinguished fields of human endeavour.

Although some period existed in the life of the University when it had challenges that tainted its corporate image, it has since risen from the ashes of dark moments to become a trailblazer and leading light among tertiary institutions in Nigeria today.

In accordance with its mission to provide the best educational experience for students and the public, OOU has been reorganised into a working citadel of learning in recent years. A lot has been achieved in the area of infrastructural development with the construction of lecture theatres, halls, seminar/ conference rooms as well as lavatories for students while administrative and office blocks for the Central Administration, Colleges and Faculties have also been provided.

More so, the University can boast of having one of the biggest and most equipped ICT centres in the country with a 3,000 capacity ICT structure, which has conference rooms, multimedia studio, e-learning digital lecture rooms, CBT and prometric centres, training and workshop rooms, all equipped with the latest technological gadgets.

Of note, various chapters of the University Alumni Association, at home and in the diaspora, have donated physical structures as well as teaching and office equipment, including smart boards, computers, projectors, printers, fans and chairs for the use of the varsity.

The institution has also experienced tremendous improvement in library resources with subscriptions to renowned virtual libraries such as E-library database, the MIT, cloud hosting of the library database and Stand-Alone e-book collections in addition to good collections of books and journals for the various academic programmes.

The University E-library has been highly rated such that the slogan in OOU now is: “if it’s published, we have it. If we don’t have it, then it’s not published!” Testimonies abound even from different accreditation panels of the National Universities Commission (NUC).

Besides, staff welfare has seen remarkable improvement. OOU is unarguably among the few public varsities in the country which regularly pay salaries and emoluments and ensure promotion as and when due.

Apart from the foregoing feats, OOU has gained prominencce in webometric rankings. A recent report by the NUC indicated that OOU is ranked 4th amongst state universities and 17th out of 279 tertiary institutions in the country.

With the enviable height already attained by the University, it always becomes crucial on whose shoulders to place the burden of its leadership. This deep-seated interest subtly played out in the course of searching for a new Vice-Chancellor when the tenure of the immediate past Vice-Chancellor was about to lapse. But at the end of the day, the lot fell upon 52-year-old Agboola.

At its 206th (Special) Meeting held on Wednesday, October 5, 2022, the Governing Council of OOU ratified the appointment of Prof. Agboola who, hitherto, was the Deputy Vice-Chancellor (Academic) in the University. The Council’s decision on the Vice-Chancellorship widely resonated with the yearnings of critical stakeholders whose preference for a qualified candidate from within the system was palpable.

Nothing could be more exhilarating than the candidacy of Prof. Agboola, who graduated from the University, rose through the ranks to be one of its prized assets and had served the institution meritoriously in different capacities.

Born on 4th July, 1970, Agboola was admitted into the then Ogun State University, Ago-Iwoye, where he obtained his M.B. Ch. B. degree in 2001. Thereafter, he had his mandatory housemanship at the Olabisi Onabanjo University Teaching Hospital, Sagamu between 2001 and 2002 and got fully registered with the Medical and Dental Council of Nigeria (MDCN). He joined the services of OOU as Lecturer II in May 2002. He bagged his Master and Doctorate degrees in 2007 and 2012 respectively at the University of Nottingham, United Kingdom.

Agboola became a Professor of Cancer Pathology in 2016. Apart from teaching various courses in his area of specialisation, he has to his credit over 50 publications in peer-reviewed journals locally and internationally.

In more than a decade, the medical expert has been deeply involved in the administration of the University. He is vast and versed. He knows his onions about the workings of the University, earning for himself the sobriquet “the encyclopedia.” He is also a respected unionist and one-time Branch Chairman of the Academic Staff Union of Universities (ASUU) in OOU.

There is no gainsaying that Nigeria’s educational system is bedeviled with a lot of challenges. Inadequate funding, decrepit infrastructure, brain drain, poor remuneration, corruption and incessant strikes are just a few of the problems. But the world is not waiting; in fact, countries which believe education is the bedrock of meaningful development are fast creating the enabling environment and repositioning their universities to come up with significant innovations in order to remain relevant in the changing, highly competitive world.

Prof. Agboola is a distinguished scholar who believes Nigeria’s approach to education, especially at the tertiary level, must change. The Vice-Chancellor holds the view that universities must be fertile grounds for discovering, nurturing and producing future leaders. In several fora, he has posited that the students of today are the leaders of tomorrow and they must be properly groomed and mentored to be optimally useful for their fatherland.

As part of his agenda and vision for the University, Prof. Agboola has emphasised three Es – education, employability and employment creation. In other words, the Vice-Chancellor has envisioned an OOU that will continuously produce students that are well educated, employable and capable of being employers of labour. Undoubtedly, his three “Es” are part of what Nigeria needs to overcome its socio-economic woes.

“We have demonstrated measurable capacity to bring about the turnaround in the University and we will continue on this trajectory to get to the promised land,” the VC declared at a recent event in the institution just as he stressed the imperative of partnership and collaboration between the academia and industry stakeholders to enhance the quality of university products in the country.

There is an old saying that “morning shows the day.” In just 100 days of being the Vice-Chancellor, Prof. Agboola has shown that he means business. This time round, business unusual. He has held meetings with various stakeholders, including staff, students, alumni and friends of the University, and shared his vision with them.

The Vice-Chancellor has taken bold steps to overhaul existing businesses of the University, notably its ventures, and streamlined the institution’s expenses. He has expressed his resolve to improve the welfare of staff and students and also extracted their commitment to reciprocating his administration’s gesture. He has equally set up a committee to carry out strategic planning for the development of the University in the next 10 years.

Agboola’s mission, and the promising manner he is going about its implementation, is a synopsis of visionary leadership. As he used to say, all that has been seen in the University in recent years is just “a pilot study.” Full implementation is about beginning. Certainly, under his fledgling administration, more goodies are coming down the pipeline. After all, it’s a five-year tenure!