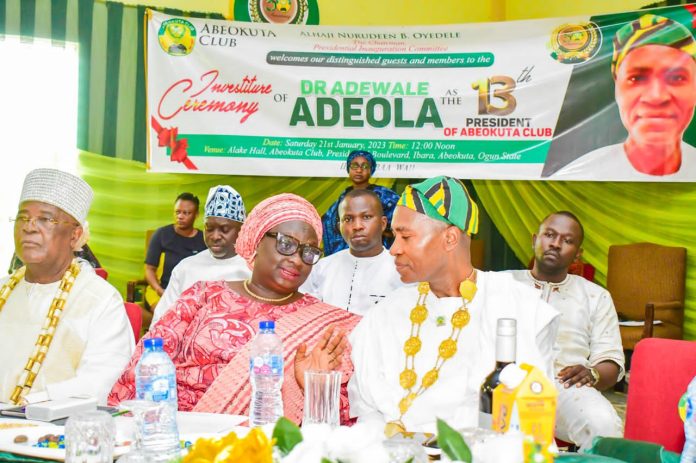 Gov Dapo Abiodun has said his government, understands the importance of recreation to healthy living, hence its decision to place the provision of adequate social and infrastructural amenities at a focal point in the ISEYA agenda.

Making this known at the Investiture Ceremony of the 13th President of the Abeokuta Club, Gov Abiodun opined that Nigeria as a country has the needed potentials to become one of the world’s most attractive tourist’s destinations .

Represented by his Deputy, Engr Noimot Salako-Oyedele, Abiodun noted that, “In Ogun State for example, God has been gracious by providing natural Tourist Centres, all spread across the State such as Olumo Rock, Bilikisu Osungbo in Ijebu, Oyan Dam, Wildlife Park and Resort, Oronna Statue, and added to these is the Abeokuta Golf Resort”

He revealed that It was for this reason that his Administration continues to strengthen the Ministry of Culture and Tourism in the state to effectively drive the sector, harness its hidden potentials and serve as  a revenue generator for its economy.

While Congratulating the 13th President of the Club on his investiture, the Governor acknowledged the pedigree of the members of the Club which was founded 52 years ago by 11 Eminent Egba sons, stating that this factor has made it a trailblazer in the history of recreation and social networking in Ogun State and Nigeria as a whole.

He Used the opportunity to call on more partnership from the private sector, saying institutions such as Abeokuta Club can play a very big role not only in social engineering, but in fostering peace, tranquillity and cultural renaissance amongst the people.

While highlighting his administration plans, to include the construction of a sports complex, public drainage system, collation of data base for club members, resuscitation of the club e-gate facilities to enhance the security architecture of the club, he called for the unalloyed support of all and sundry to have a stress free tenure.

In their seperate remarks, the Alake and paramount ruler of Egbaland, HRM, Oba Adedotun Aremu Gbadebo, Osile of Oke-ona Egba, HRH, Oba Dr. Adedapo Tejuoso,  Agura of Agura, HRH Oba Babajide Bakre, and the Olowu of Owu, HRH Oba (Prof.) Saka Adeola Matemilola, congratulated the new executives of the club, praying that their tenure shall yield good results, urging them to be good ambassadors of Abeokuta club anywhere they go.

Also speaking the life President of the Club, Chief Olatunde Abudu, congratulated the new President, charging him and his team to brace up for the task ahead and work towards the development of the club.

In his welcome remarks, the Chairman, planning committee, Alhaji Nurudeen Oyedele, congratulated the immediate past president, Engr. Tokunbo Odebunmi and his team for running a successful tenure, appreciating their contributions to the development of the club.

He noted that grooming and selection process for the club president is different from what is obtainable in other social clubs, congratulating Dr Adeola for emerging as president after the thoroughly done election process.