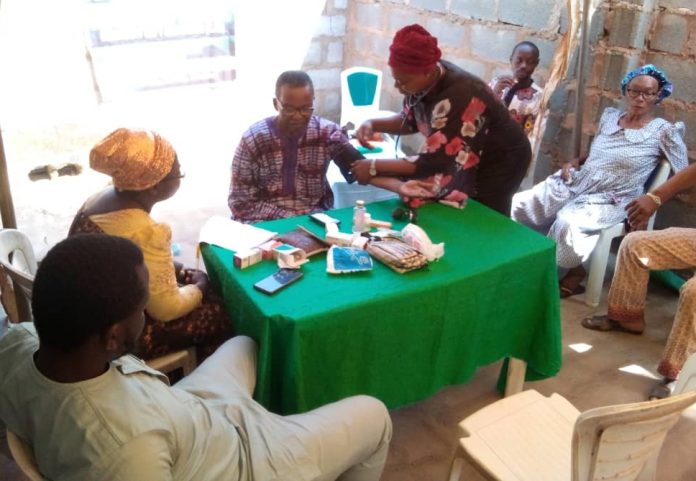 The Ajagbohun Central Community Development Association (ACCDA) Obantoko Area of Odeda local government area of Ogun State has embarked on a free medical outreach for its members at the weekend.

The Special Assistant on Media to the former President, Chief Olusegun Obasanjo, Kehinde Akinyemi is the Chairman of the Community on second term tenure.

No fewer than 50 members of the association benefitted from the medical outreach, including checking of High Blood Pressure, other related health challenges and giving of prescribed drugs, at an event held at Ajagbohun Central area of the CDA.

The CDA Chairman, Kehinde Akinyemi said the exercise was part of the promise made to improve health status of members shortly after his emergence as a second term Chairman of the Community in July, 2022.

According to Akinyemi, “the exercise was part of moves to check and reduce the growing tide of High Blood (HB) pressure incidences among other salient medical illnesses among us in and around Ajagbohun Obantoko area with 10 Community development associations.

“The major objective for this event is to bring healthcare services closer to the residents at no cost, because as we all know, access to medical care is a big challenge in recent times in this country and people are dying or carrying this burden in silence.

“With supporting Elders, Leaders, Youth and Women, we got an impressive turnout of members and the medical team was very accommodating to all,” Akinyemi said.

The CDA Chairman hinted that the exercise would be a continuous one in the community, promising that a quarterly date would be worked out in the new year.

Earlier, the visiting Medical Doctor, Dr. Kehinde had counselled the community members on the Dos and Don’t of staying fit and healthy in this period of the economy, stressing that: “We need to be free from getting stressed of any situation. Let just be at peace with ourselves.

“When we are diagnosed of any ailment, the important thing next, is the management of such ailment, which can give us longer years on earth. We must keep using our drugs as at when necessary and stay away from what we have been told to stay away from,” the Medical Doctor advised.

Dr. Kehinde, who was supported by professional nursing personnel from the Community disclosed that about 50 residents were checked and offered the prescribed drugs (where applicable), which were equally made available by the Akinyemi-led leadership.

It should be emphasised that the medical team offered their service prono-brono for the event.