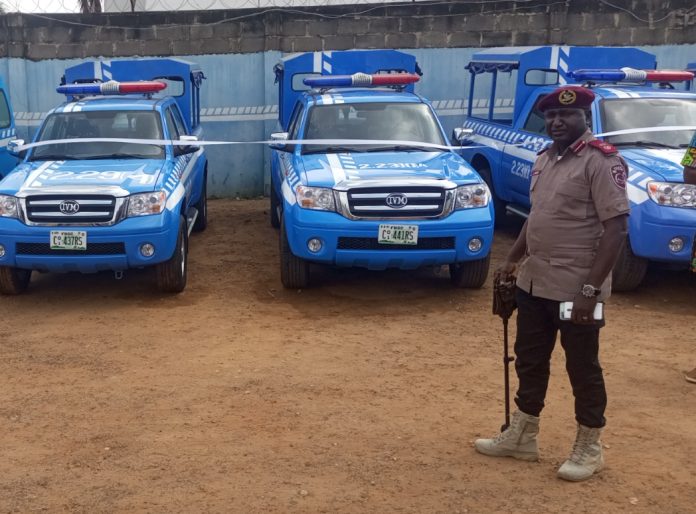 The Federal government has donated five operational vehicles to the Ogun sector command of the Federal Road Safety Corps (FRSC), towards the safety of lives and property especially on the nation’s highway.

Speaking during the unveiling of the vehicles at the command’s headquarters in Abeokuta, the Ogun Sector Commander, Mr Ahmed Umar , said that the vehicles would enhance effective operation of the officers of the command.

Umar pointed out that the vehicles would be deployed to Lagos-Ibadan expressway to strengthen the existing ones on the axis and to checkmate frequent crashes on the road.

The sector commander announced that over 1,000 officers of the command would also be deployed to various roads to ensure safety on the roads as the yuletide season approached.

He noted that the command would continue to ensure reduction in crashes and fatalities on various highways across the state.

In his remark, the Ogun Commissioner for Transportation, Mr Gbenga Dairo, said there was need for the sector to pay attention to other roads aside Lagos-Ibadan expressway.

Dairo, who commended the efforts of the acting FRSC Corps Marshal, Mr Dauda Ali-Biu to ensure safety on the nation’s roads, advised the officers of the command to effectively and adequately put the vehicles into good use.

The commissioner stated that the state government would continue to support activities of FRSC in the state.

Earlier, in their separate contributions, the Special Adviser to Gov. Dapo Abiodun on Security, Olusola Subair and the Commissioner of Police, Mr Lanre Bankole said the vehicles would go a long way to reduce road mishaps.