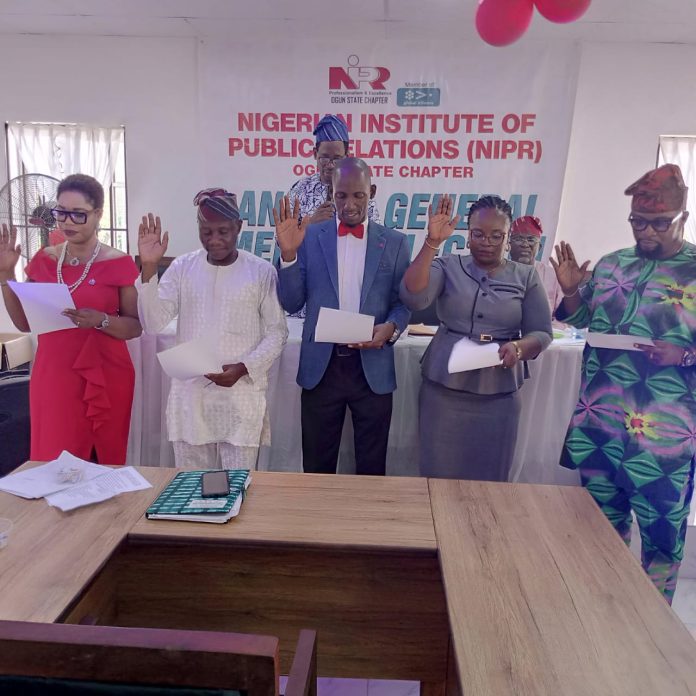 Ahead of the 2023 general elections, the newly sworn – in Chairman of the Ogun State Chapter of the Nigerian Institute of Public Relations, Mrs. Seun Boye has called for issue based campaigns as well as better involvements of the electorates in the electoral process in order to deepen the democratic process.

She made the call shortly after being sworn- in alongside other members as the new executives of the chapter for the next two years during her Annual General Meeting held at Oke- Ilewo, in Abeokuta.

According to Boye , as the electioneering campaign is here, politicians need to play the game by the rules and avoid acts capable of truncating the system.

“In order not to heat up the polity, politicians must play by the rules and promote issue based campaigns in line with the principles of public relations of constructive engagements”, she said .

The NIPR Chairman also called on the electorates to get more involved in the electoral and political process by preparing to play the roles expected of them appropriately in order to help deepen the democratic process.

On the plan of her administration to reposition the Ogun State Chapter of the Nigerian Institute of Public Relations, Boye informed that, working for the building of a befitting Secretariat for the Chapter will be top on the priority, while resuscitation of the annual Colloquium as well as the ” Image Maker “, the NIPR professional publication are also to be given priorities.

Also to be expected is the automation of the process of registration as well as enhancing visibility through the creation of website among others.

Earlier, the immediate past Chairman of the Chapter, Mr Lekan Togunwa also called on Campaign Managers to imbibe PR education and orientation.

This he noted, would moderate activities of political candidates and voters to have a free and credible elections in 2023, maintaining that PR is of a divine philosophy and value.

The Registrar on the Institute, Mr. Olukayode Yeku while admonishing the new executives, told them they have a lot of work to do and that they should strive not to end up as an endangered species.