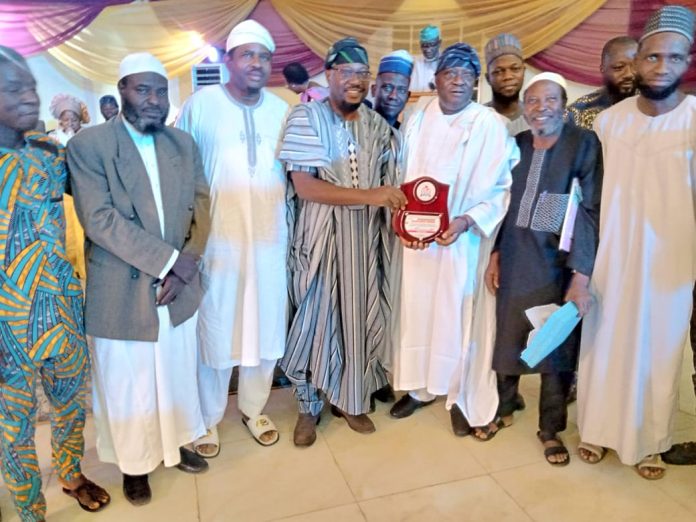 Crescent University, Abeokuta has been honoured with a distinguished award of excellence at the 13th Gbagura Day Celebration.

The institution which prides itself as citadel of academic and moral excellence was a cynosure of all eyes as its citation of achievements was being read amid applause as the Registrar, Barr. Zakariyya Ajibola received the award on behalf of the university.

Earlier, His Royal Majesty, Oba Saburee Babajide Bakre, Jamolu II and Agura of Gbagura had bestowed on Crescent University founder and former judge of the International Court of Justice, Judge Bola Ajibola a distinguished public service excellence award in recognition of his numerous contributions to the development of law, arbitration, education, social philanthropy and Gbagura Kingdom.

Oba Bakre presented the award in company of His Royal Majesty Oba Prof. Saka Matemilola, the Olowu of Owu Kingdom to a member of the Board of Trustees of Crescent University, Prince Mahruf Adesegun Ajibola (SAN) on behalf of Judge Bola Ajibola.

In his acceptance speech, Prince Adesegun Ajibola expressed gratitude to Agura and the main organizing committee for recognizing the legal icon, describing the award as worthy.

He said Judge Ajibola’s numerous achievements went beyond law and arbitration, stressing that locating Federal University of Agriculture, Federal Secretariat and Naval School in Abeokuta by the federal government, was due to Judge Ajibola’s influence under the Ibrahim Babangida administration.

In a related development, the Dean of College of Arts, Social and Management Sciences of Crescent University, Emeritus Prof. Kamaldeen Balogun was also honoured at the occasion with a Distinguished Public Service Excellence Award.