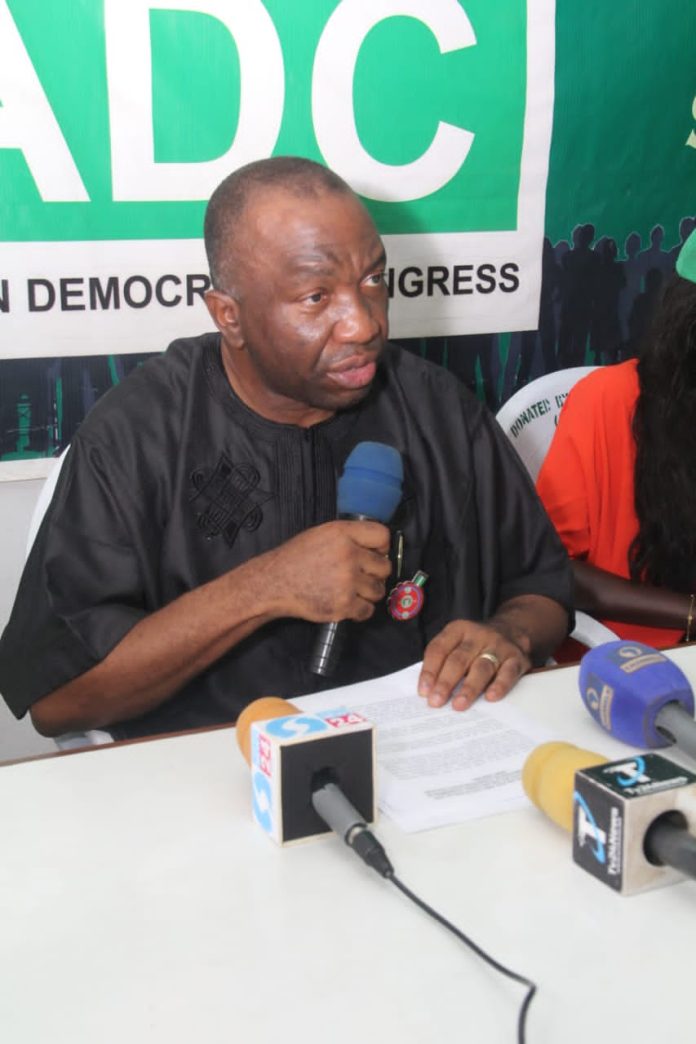 Prof. Ralph Nwosu, the National Chairman, African Democratic Congress (ADC) has reaffirmed that nothing would stop the party from fielding candidates and contesting the 2023 general elections in Ogun state .

Nwosu made this known at a news conference on Monday in Abeokuta.

The national chairman expressed optimism that the party is coming back stronger and would win at the appellate court.

It would be recalled that the Federal High Court in Abeokuta had repudiated the validity of ADC candidates after a motion filed by the Labour Party over alleged non-compliance to the electoral act in the conducts of its primary elections.

” It is the considered opinion of our legal representatives that the judgments were drenched in advertent inaccuracies, especially when interrogated with existential contexts, points of law and even recent precedence.

“Subsequently, we have filed for redress at the Court of Appeal and we are confident that the orders of the lower courts shall be overturned and all our candidates will be revalidated.

“ADC has been targeted in the state, but I can assure you that Justice will prevail. Some desperate people want to thwart the finest element of democracy, the power of the people to vote whom they want, believing they can manipulate and corrupt the systems and persons.

“Only in Ogun state, people who are not connected with ADC have been used to file over 2 dozen cases in the Federal High Court against our dear party.

“As if the courtrooms have become polling booths, INEC observed that over 800 cases have been filed against the commission by political parties especially APC and PDP,” he said.

The ADC national chairman called on party faithful to keep hope alive and continue working assiduously for the victory of the party at the election.

He refuted the report that the party had agreed to work with another political party for the 2023 general elections because it no longer has candidates.

He described the report as “false in its entirety”, saying all the party’s candidates remained as they are.

He added that the purveyors of these reports were only only riding on the party’s temporary challenge to hoodwink members or lie to the public that ADC had joined them.