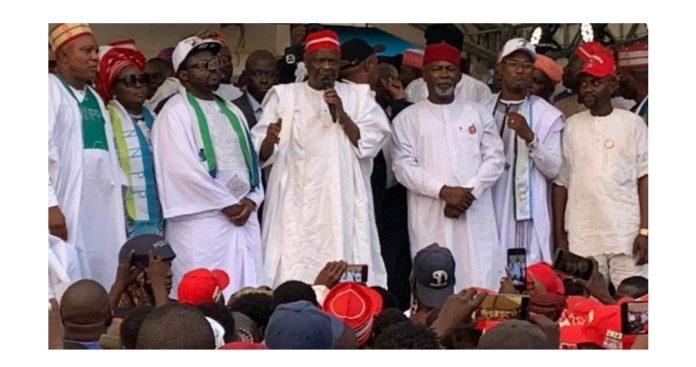 The Presidential Candidate of New Nigeria People’s Party (NNPP), Sen. Rabiu Kwankwaso has stated that the party’s blueprint for the 2023 presidential election would maximally addressed the challenges confronting the nation.

Kwankwaso stated this on Thursday during the inauguration of the party’s secretariat in Abeokuta, the Ogun state capital.

The NNPP presidential candidate hinted that improved economy, free education, adequate security among others were some of the programmes that would be adequately achieved by his administration.

He promised additional one million security personnel to address the challenges of insecurity in the country if elected Nigeria president in 2023.

He reiterated that the party had no plan to merge with any party before, during and after the election, describing it as political jargon.

Kwankwaso tasked Nigerian youths and women to read the blue print of the party to see what the party had in plan for them.

“Merging with another part is a rumour by people who have nothing to offer Nigerians. We have our candidates in everywhere in our party, everyone is campaigning, so disregard that nonsense.

“First of all, let me remind you that our blueprint made it very clear that nobody will be denied Education at all levels because of the social status.

“And I want to remind you that we are going to recruit about One Millions of armed forces to take care of security of this country. So also police force and other security agencies. Let me remind all of you that we have decided to set up committee at Ward level.

Earlier , the State Chairman of NNPP , Olaposi Oginni, assured Nigerians that the government of Kwankwaso would take Nigerians out of poverty.

“I want assure you that, the government of Kwankwaso is going to take Nigerians out of poverty land and he is coming to liberate Nigeria.

” As you see fruit in the flag of our party, Kwankwaso is coming with the fruit of joy, the fruit of development, the fruit of taking Nigerians out of poverty because he is the one that God has chosen and sent to get Nigeria out of problems,” he said.

The Gubernatorial Candidate of the party, Olufemi Ajadi , implored the people of Ogun state to vote massively for the party in 2023 general elections for the betterment of the country.

OgunToday reports that Kwankwaso received decampee from other political party’s at the event.