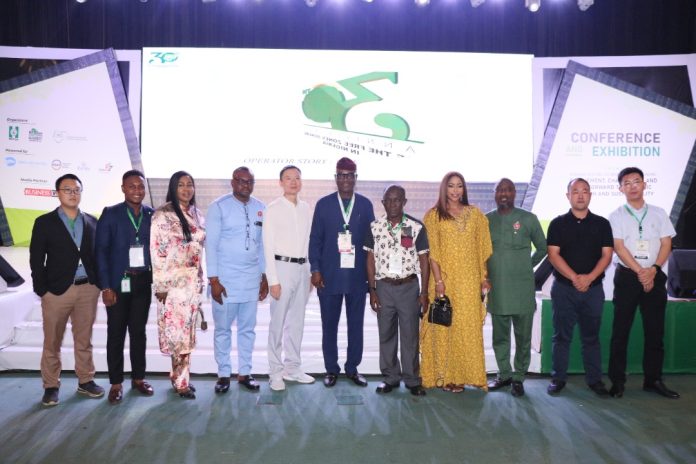 The Nigerian Export Processing Zone Authority ( NEPZA) has declared its readiness in ensuring an unprecedented growth and general awareness both locally and internationally to attract investors to Nigeria.

This was made known by the NEPZA Managing Director, Professor Adesoji Adesugba while celebrating its NEPZA 30th year anniversary with a weeklong summit, exhibition and fanfare.

The summit, according to the organizers continued with the African Economic Zones Organization (AEZO) 7th Annual Summit which was hosted by the Nigeria with the NEPZA 30th Anniversary.

At least, no fewer than 38 countries across the world were participated while African Development Bank (AFDB), UNCTAD & China Green Garden and Parks among others were major corporate partners.

It was an occasion to mark and showcase the achievements of the agency during the past 30 years since its establishment in 1992. The celebration started with an exhibition featuring major Free Trade Zones, Free Zone Management Companies, Free Zone Enterprises and other major stakeholders.

The Ogun-Guangdong Free Trade Zone (OGFTZ) established in 2008 is one of Nigeria’s leading Zones under the Free Zone Scheme. OGFTZ is a partnership between Ogun State government and China-Africa Investment Free Zone Company, which has its headquarters in Guangzhou, Guangdong Province, China. It is located in Igbesa, Ado-Odo/Ota Local Government Area of Ogun State, managed by China – Africa Investment FZC. The present chairman of the Board of Directors is Hadjia (Dr.) HASFAT ODUWOLE TAFAWA BALEWA.

The anniversary continued with a summit where investment experts, moguls and principal officers of major Free Trade Zones across the globe extended their goodwill messages including the General Manager, China -Africa Investment FZC, Dr. Hanson Huang.

This was followed by presentation of special awards for Enterprises and organizations for their exemplary and impactive contributions to the development of the Free Zone Scheme in Nigeria.

The OGFTZ came out with most awards winner of the night with four(4) awards, namely;
1.FMC EXCELLENCE AWARD FOR BEST IN INFRASTRUCTURAL INVESTMENT , CHINA-AFRICA INVESTMENT FZC.

4.APPRECIATION AWARD TO OGUN-GUANGDONG FREE TRADE ZONE AS A SILVER SPONSOR OF THE NEPZA 30TH ANNIVERSARY.

The awards is a testament to the great and laudable efforts to all stakeholders particularly the Management company and the state government through His Excellency, Prince Dapo Abiodun, the Executive Governor of Ogun State.