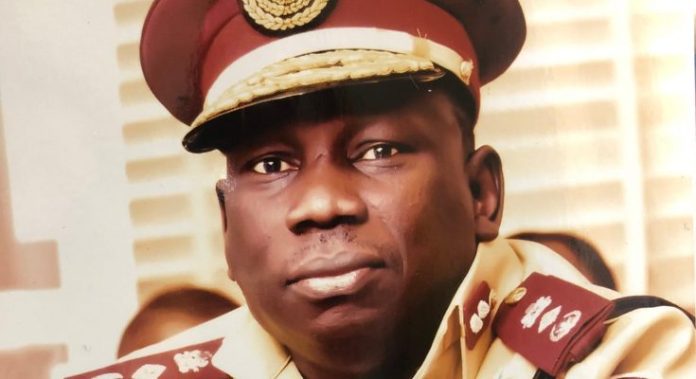 The Acting Corps Marshal of Federal Road Safety Corps (FRSC), Dauda Ali Biu, has cautioned driver’s of articulated vehicles against recklessness while on the road especially during the festive season.

Biu stated this on Wednesday at the End of the year special intervention sensitization campaign for gridlock and crash prone areas Nationwide, held at Ogere trailer park.

The programme is with the theme “Driving Tired is as Dangerous as Driving Drunk: Observe 30Minuites Rest Period After Every 4Hours”.

Biu urged the drivers to always respect and put into consideration other vehicles on the road.

Biu, represented by the Head of National Traffic Radio Abuja, H.A. Ogundayo , noted the expected Minutes for the drivers to have rest for long distance journey before getting to the destination.

He implored them to avoid anything that could cause accident on the road, especially at this festive season.

“Don’t see those that are driving small car as rat or some thing small while driving. If you are to drive, don’t drink and if you are to drink, the only thing you are expected to drink is water.

‘When you are tired, your body will be telling you that your body is tired but some of you always risk it that you will soon get to some particular place to rest but FRSC is saying no.

“Road safety is a collective responsibility, it is not only the work of Road safety officials. All of us driving to the same aim and that aim is safety on the road. Make sure you rest for at least 30Minuites before you continue your journey at a safety place.

“Don’t put your safety in the hand of another person. Every life counts, we don’t want to be loosing lives on the road, we don’t want to record casualties in the New year. Don’t allow anything to distract you while you are driving,” he said.

Gov. Dapo Abiodun of Ogun, represented by the Senior Special Assistant on Security, Olusola Zubar commended the Corps for organizing the programme and their efforts in ensuring the safety for all the road users Nationwide.

The Sector Commander of FRSC, Ogun state command, Ahmed Umar noted that the programme was organised to sensitise and curb all the atrocities made by drivers and other road users.

“The directive of the Acting Corps Marshal of Federal Road Safety Corps, Dauda Ali Biu, that this special sensitization holds here at Ogere is wise and timely.

“This is because since the completion of Phase II of the reconstruction of Lagos – Ibadan Expressway (Sagamu to Ibadan), Road Traffic Crashes and deaths especially between Ogere and Ogunmakin have increased at a troubling rate.

” Excessive Speed by trucks, buses and other categories of vehicles has been the most prominent cause of these crashes.

“FRSC Ogun State Command consequently increased patrols with the Police, Army and NSCDC to curb excessive speed, sustained enforcement of the use of Speed Limiters by Commercial vehicles, re-introduced the use of red flags to slow down speeding vehicles .

“FRSC Ogun State Command is also in talks with the Federal Ministry of Works and Housing on the construction of rumble strips and other speed calming devices along this Expressway.

“A total of 434 trucks and Articulated Vehicles have been involved in the 908 Road Traffic Crashes recorded across Ogun State this year. These crashes claimed the lives of 327 people while FRSC rescued 2,215 others with various degrees of injuries to nearby hospitals across the State,” he added.

Umar urged the driver’s to maintain a maximum of 60km/hr on Expressways, avoid the intake of drugs and alcohol but take enough rest before any trip and for at least 30 minutes after every 4hours of driving.

“Please also make sure your trucks are in good condition as FRSC tow truck and those of TRACE have been deployed to quickly remove broken down vehicles on all highways across Ogun State.

“We have also commenced Joint Patrols with NDLEA to apprehend motorists driving under the influence of drugs or alcohol,” he said.