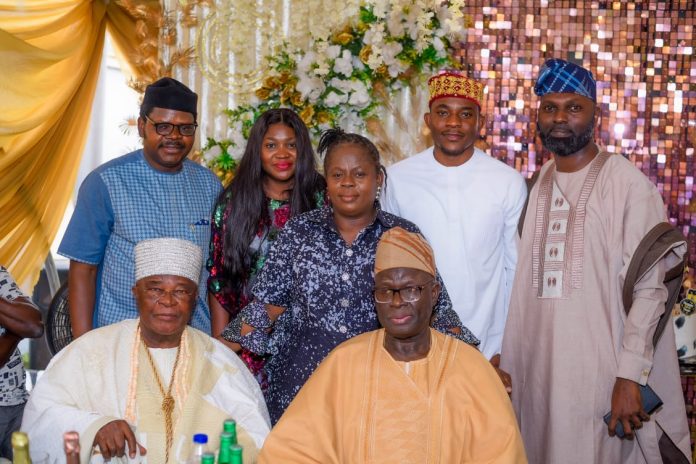 The Alake and Paramount ruler of Egbaland, Oba Adedotun Aremu Gbadebo has described the cerebral Egba economist, Dr. Gbenga Adeoye as an hardworking and talented man whose success story was worthy of emulation.

The Alake stated this on Monday while joining Egba Sons and Daughters from all walks of life to celebrate the New year and the call to Bar of popular economist, Dr. Gbenga Adeoye.

Alake explained that the determination for success of Dr. Adeoye to combine Law with Accountancy inspite of obtaining Ph.D in Management Accounting was worthy of emulation.

The royal father encouraged him to keep moving while expressing his appreciation to the wife Mrs Oluwakemi Abolaji Adeoye for standing by her husband all though his career development goals.

Alake described Dr. Adeoye as a talented and hard-working man with integrity, saying that was why so many people from all over the country joined him to celebrate the New year and his call to Bar despite their very busy schedule.

Also speaking at the event, the former Minister of Finance, who is also a mentor to the celebrant, Dr. Onaolapo Soleye emphasized the charismatic posture of Barr. Adeoye and his role in resolving tax dispute all over the country.

Soleye expressed joy that several top people in different entities have approached him to expressed their satisfaction and delight with Dr. Adeoye’s integrity in professional service which has earned him good reputation with government at all levels in Nigeria.

Soleye noted that the celebrant is always happy to speak for the oppressed and help lift the downtrodden out of penury and several has reported directly to him the positive contributions made in their lives by Dr. Adeoye.

Soleye stated further that Adeoye is generous to a fault and that his wife is worthy of celebration, adding that without his wife Mrs Kemi Adeoye, he would not have been able to achieve his goals.

Also speaking, the Rector of Moshood Abiola Polytechnic, Dr. Adeoye Odedeji, posited that Dr. Adeoye and himself had the same type of background and worldview.

Odedeji hinted that all that was said about the celebrant was the absolute truth.

Speaking on behalf of the Community, the Chairman of the CDA, Elder Sola Adelakun noted that Dr.Adeoye is so humble that he does not look down on anyone and he is one person that you can run to in solving any problem in the community.

He expressed delight at the level of network of the Accountant turned Lawyer who will always find solution to any problem reported to him for help .

In a sermon delivered by Elder Sam Adeogun from Alleluia Christian Chapel who is also the project Coordinator for IFAD/ Ogun State Agric Project, admonished everyone to trust God because God has all the powers to make anyone great.