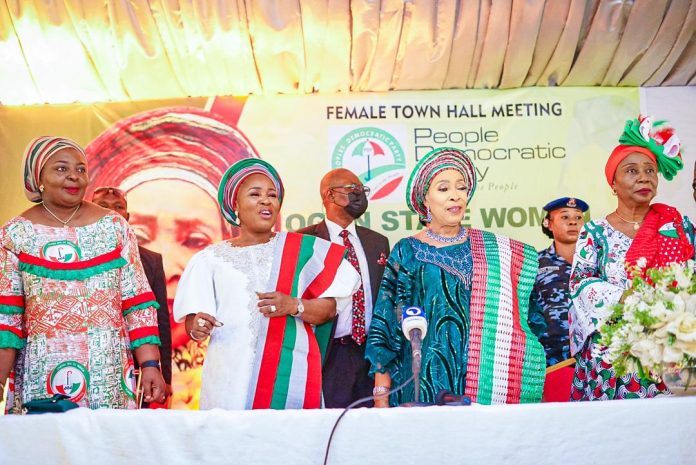 Hajia Titi Atiku Abubakar, Wife of the Presidential Candidate of the People’s Democratic Party (PDP) has said that her husband, Atiku Abubakar would as a matter of priority tackle the issue of unemployment, poverty, insecurity in Nigeria if elected.

Mrs Abubakar stated this at a town hall meeting with Ogun women on Friday in Abeokuta.

She also stated that Alhaji Atiku had gotten all the required knowledge and wisdom to reset the country and make it a better place for foreign investors to patronise.

She explained that good governance is not new to her husband, hence, his resolve to take up the position to be Nigeria’s next president.

She noted that her husband was instrumental to the success recorded during Former President Olusegun Obasanjo’s eight years tenure.

She described her husband as a unifier capable of fixing the various challenges facing the nation.

She listed the challenges to include, insecurity, unemployment and poverty among others, adding that her husband has enough experience to deliver the country.

” Atiku has done it as a vice president, he has enough experience to lead the country.

” He is instrumental towards the creation of ICPC, EFCC and GSM evolution during the Obasanjo’s regime. If you vote Atiku, he will do more,” She said.

Mrs Abubakar while addressing the women told them to see themselves as nation builders, saying that they play a key role in the socioeconomic development of the nation.

She noted that if her husband is voted in, she would become the first Yoruba First Lady, just as she promised to ensure speedy fulfilment of all election promises.

According to her, only a woman can know the pains of her fellow women, saying that she would ensure that women were placed in the front burner of quality governance.

She urged them to get their Permanent Voter Cards (PVCs) , ” your PVC is a pilot to a better life”.

She urged the women not to keep their PVCs inside wardrobe after collection but to ensure they go out enmass and vote PDP candidates.

The Wife of the PDP Governorship candidate in the state, Adenike Adebutu, commended Mrs Abubakar for always fighting the course of Nigerian women and children.

Mrs Adebutu also called on the women not to allow themselves to be disenfranchised by ensuring that they collect their PVCs before the deadline for collection.