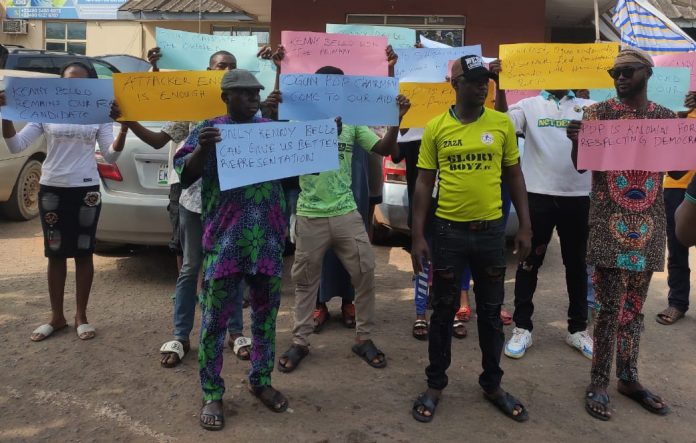 Concerned group from Ogun East Senatorial district has expressed displeasure over alleged plan by the Peoples Democratic Party (PDP) at the National headquarters to substitute the name of the winner of the Ijebu North, Ijebu East and Ogun Waterside Federal constituency primaries won by Hon. Kenny Bello

The group protested in Abeokuta and carried placards with inscriptions such as ” PDP is known for respecting Democracy”, ” Only Kenny Bello can give us better representation”, ” Kenny Bello remains our Reps. Candidate”, among others.

Speaking on behalf of the protesters, Mr Adeyemi Yunus, said that it was unfortunate that the party could think of substituting the name of the winner of a primary election.

Yunus noted that the incumbent house of representatives member representing the constituency, hon. Adesegun Adekoya AKA Attacker lost during the primary election, saying that information reaching the group indicated that the party at the national wanted to impose Adekoya as the candidate.

He noted that the primary election was supervised by the representative From the National headquarters and observed by the Independent National Electoral Commission (INEC) officials.