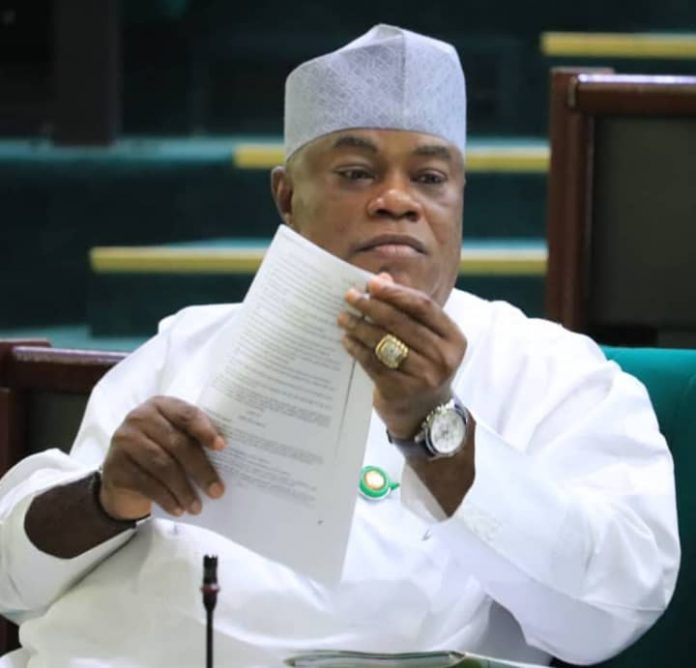 As the 2023 general election draws nearer, there are indications that the Deputy Minority Whip of the House of Representatives, Hon. Adesegun Adekoya a.k.a. Attacker, is set to defect from the Peoples Democratic Party (PDP) to the All Progressives Congress (APC).

Adekoya, who is the only PDP lawmaker from Ogun State, seems to be putting finishing touches to his plan to defect to the ruling party.

A pointer to this was the New Year get-together he organised at his Constituency Office in Ago-Iwoye, Ijebu North Local Government Area of the state where a former Governor of Ogun State and now APC chieftain, Otunba Gbenga Daniel, was the chairman of the occasion.

Daniel, who spoke in Yoruba language, said he and Adekoya had come a long way.

The ex-governor further stated that when the snail moves, it moves with the shell, adding that “if it was Attacker that will pull him or he that will pull Attacker remains to be seen,” a statement which Adekoya nodded to even as he brimmed with smiles.

His supporters, who were made up of mainly his kinsmen in Ago-Iwoye, roared and clapped apparently to show that they got the drift.

Party sources, who said Adekoya has always been seen more as an APC lawmaker than PDP’s, claimed that this accounted for the opposition of the Uche Secondus-led PDP National Working Committee to his emergence as the Deputy Minority Whip of the House of Representatives.

Though opposed by the then PDP leadership, Adekoya curiously had the support of the Speaker Femi Gbajabiamila and his other APC members for the position he currently occupies at the lower legislative chamber of the National Assembly.

Since his emergence as Deputy Minority Whip, Adekoya has allegedly been scheming to worm himself to the hearts of those that matter in both the PDP and APC.

While his chances in the PDP appear to be getting slimmer by the opposition from Hon. Oladipupo Adebutu-controlled State Executive Committee of the party, the federal lawmaker has reportedly been sending emissaries to APC chieftains with the hope that they will give him the ticket to seek re-election for a third term.

Sources said Adekoya is worried that the Hon. Sikirulai Ogundele-led State PDP Executive will not give him the ticket.

By 2023, Adekoya, who is from Ijebu North Local Government Area, would have occupied the position for a total of eight years back-to-back since 2015.

While he could not account for much in terms of representation during his first term, he has been flaunting many federal government-sponsored projects which he claimed to have facilitated
by virtue of being a principal officer of the House of Representatives in his second term.

“We have our rotational arrangement in our federal constituency. Attacker got the second term ticket because of the rift within the then APC. Mark my words, any party that gives him the third term ticket will lose at the polls,” a top politician, who does not want to be mentioned, said.

A top member of the PDP also remarked that Adekoya was only being opportunistic and unrealistic.

“PDP stands for justice and fairness. There is no way we will give him the ticket for a third term. Let him go to anywhere; we will not miss him, we have not felt his impact within us in the last six years. We wish him well, it will be good riddance to bad rubbish,” the party stalwart said.

2023 : I will reinstate demoted Coronet Obas if elected – Otegbeye