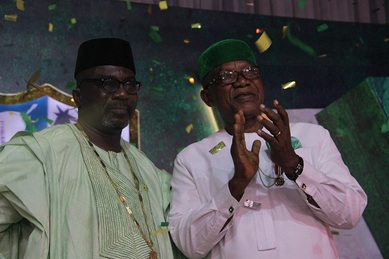 Prof. Lillian Salami, the Vice Chancellor, University of Benin, has tasked the Pharmaceutical Society of Nigeria (PSN) to intensify fight against abuse of substances as well as getting rid of fake and expired drugs from the country.

Prof Salami stated this while delivering her lecture during inauguration of PSN newly elected President, Prof. Cyril Usifoh and the conferment of Fellowship awards on 112 worthy Ambassadors of Pharmacy profession.

Earlier, the Inauguration Planning Committee Chairperson, Joke Bakare , advised the recipients of the prestigious awards to uphold the standard of practice and represent the association dutifully in their respective capacities.

Also, the Chairman of the occasion, Dr Dere Awosika, reassured the general public that members of the PSN were capable of any desired development the nation may need in areas of health safety, medicine and its usage.

The immediate past president of the association, Mazi Ohuabunwa mounted the podium to transfer the leadership mantle to his successor which is the official symbol of authority .

He expressed his total confidence in the capability of the new president.

“I am handing over to Prof. Usifoh, and I am not reluctant to do so because i believe in his capacity to deliver,” he said.

In his inaugural address, the new PSN president, urged all within the rank and file of the professional circle to be united to progress and development in the areas of medicines and health care.

He stated that good listening ability, accountability, professionalism and transparency, were key leadership qualities to achieve the goals , saying it would be embraced during his tenure.

“If we want a united and progressive pharma-space, where pharmacists are increasingly relevant and respected for their invaluable contributions, then we need to work as a family,” he said.

In his remark, Minister of State for Health, Dr Olorunnimbe Mamora, urged all the pharmaceutical profession to shun every form of unhealthy rivalry at work and engage actively in research for new methods and relevant medical solutions that align with new technologies.

Mamora added that the professional body would always have the full backing of the Federal government in all their research and noble activities.