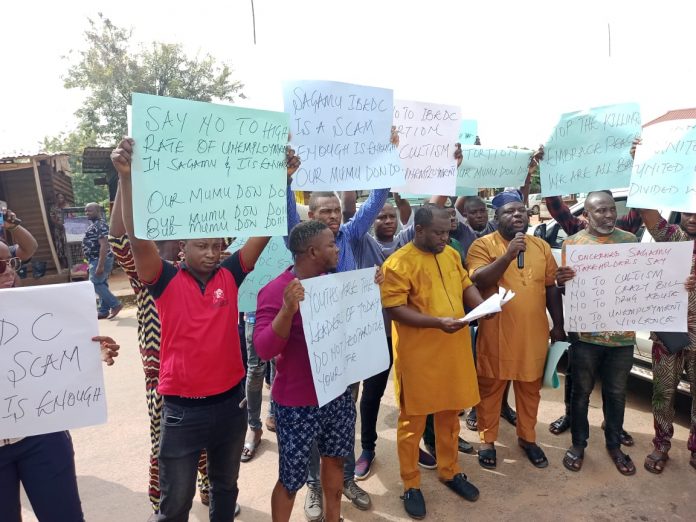 Concerned Sagamu youths on Wednesday protested against the unlawful imposition of outrageous estimated billing system by Ibadan Electricity Distribution Company (IBEDC) on the electricity consumers in Sagamu and her environ.

The youths who also protested against incessant cult clashes within Sagamu metropolis were carrying placards with inscriptions such as ” Sagamu IBEDC is a scam, enough is enough, our mumu don do” , ” No to cultism, no to crazy bills , drug abuse and violence.

Speaking on behalf of the stakeholders, Mr Kayode Segun – Okeowo, noted that since the inception of IBEDC, the electricity distribution company had not been customer friendly, most especially in Sagamu.

” There are cases of many communities in Sagamu not having light for weeks and months, yet electricity bills kept flying to this places.

“You will again agree with us that IBEDC is making us pay for electricity we don’t consume. Even in most cases, the transformers, cables and other materials  being used by IBEDC are provided by the people but only for them to claim ownership of our collective efforts and sweats,” he said.

He opined that IBEDC must ensure and begin a process of supply of free prepaid meters to all electricity consumers in Sagamu.

He stated further that there must be cancellation of all questionable accumulated debts based on estimated billings prior to the mandated installation of prepaid metres.

” We are using this medium to send a very strong warning to IBEDC management not to attempt to disregard any of our demands,” he said.

Segun-Okeowo explained that the disturbing issues were affecting the economic and social development of Sagamu community.

On the issue of cultism, he stated that it remained disheartening and disgusting that Sagamu had became a centre field for cult related activities and killings.

“Many stakeholders and community leaders have come up with different ideas, scopes and way forward to end this menace but it’s very unfortunate to state that all efforts on the sensitization, peace and reconciliation processes have proven abortive and seems as if there is no solution to this menace.

“The rise in cult killings in Sagamu have come to a peak of communal shame for Sagamu at the comity of towns and cities in Nigeria.

“Therefore ,at this meditational and conscious point, there is absolute and compulsory need for every Sagamu sons, daughters and residents to as a matter of must, rise up and raise their voice against every act of cult killing in Sagamu and not minding whose ox is gored,” he said.