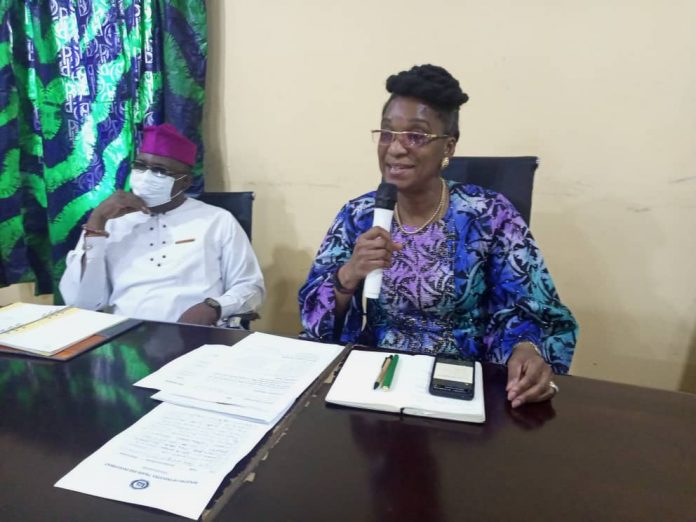 The Ogun State government has charged newly appointed Corporate Haulage Agents to be transparent and fair as well as ensure they fully comply with terms of their engagement as they contribute their quota to improving the State’s revenue.

Commissioner for Industry, Trade and Investment, Mrs. Kikelomo Longe who gave the charge while addressing the agents at the Ministry’s Conference Room, Oke-Mosan, Abeokuta admonished them to discharge their duties diligently while adhering to the principles of transparency, equity and justice stressing that those principles were sacrosanct to the Prince Dapo Abiodun-led administration.

Speaking on the legality of haulage fees collection, the Commissioner stated that the revenue is backed by law adding that haulage fees collected was part of the funds utilised in the construction of road projects and various infrastructure across the State.

“There is a law that backs corporate haulage. The companies have to pay for corporate haulage. You are urged as partners to let us have enough information as much as possible to work with. We will provide necessary support for you to discharge your duties effectively,” the Commissioner said.

Longe emphasised that the agents should identify companies that had refused paying haulage fees adding that the government was willing to take steps which would ensure companies comply with the dictates of the law.

In his contribution, Special Adviser to the Governor on Industry, Trade and Investment, Chief Remi Ogunmefun charged the agents to improve on past performances adding that the Ministry would relate with Business Membership Organisations like the Manufacturers Association of Nigeria (MAN) to further aid in relating with companies.

In his remarks, Permanent Secretary, Ministry of Industry, Trade and Investment, Mr. Olu. Ola. Aikulola said agents should not abandon their responsibility mid-way adding that they should be sincere while working on improving on last year’s performance.

Aikulola assured that the Ministry has increased on its enforcement on haulage fees collection adding that the Ministry was also on the lookout for companies deploying different strategies to avoid paying taxes into government coffers.

Speaking, one of the appointed agents, Mr. Kayode Sijuade while commending the State government for the responsibility assigned to them called on the government to increase enforcement so as to ensure companies who have refused to pay haulage fees are made to face the law.

Further making a case for increased enforcement, Sijuade said some foreign-owned companies over the years through the help of street urchins and some traditional rulers avoided paying haulage fees adding that agents have also been facing the challenge of illegal haulage tickets.