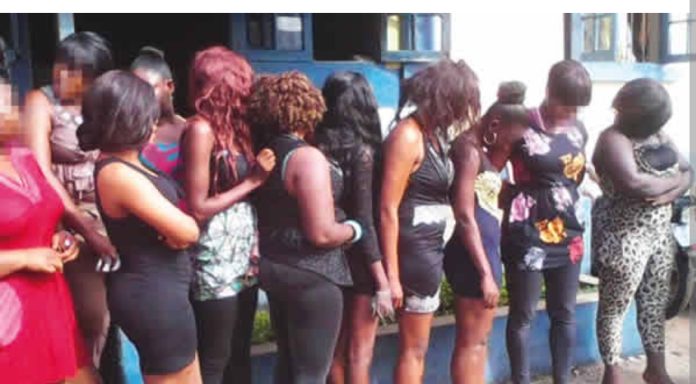 As part of efforts to sanitize its secretariat, the Ogun State Council of the Nigeria Union of Journalists (NUJ), has issued a strong warning to commercial sex workers, also known as ‘Olosho’, and hoodlums loitering and wandering within its premises at Iwe Irohin House, Abeokuta.

This was made known on Thursday in a press statement signed by the Chairman, Comrade Wale Olanrewaju and made available to newsmen by the Secretary, Com. Bunmi Adigun at the Council secretariat, Iwe Irohin House, Abeokuta.

According to the statement, the Union noted that all human nuisances and social vices such as commercial sex work, unguarded smoking and aimless wandering that have characterized its secretariat have caused the Union its reputation and integrity and must be stopped immediately.

The statement further disclosed that the Union has agreed to deploy the services of the Nigerian Police and other security agencies to ensure the arrest of any sex worker and other wanderers found in the act of these uncharitable endeavours that have brought the Union to ceaseless public opprobriumn.

“Iwe-iroyin is not a hook-up place or site for criminal activities, rather, it is a corporate territory, where absolute sanity is required. We are therefore resolved to rescue our secretariat from the ignominy recklessly enthroned by these faceless, lowlifes and morally unacceptable characters with inextricable proclivity, bringing the Union to ceaseless public opprobrium”, the statement reads.

The Union therefore appealed to the general public, especially those that were into the operation of commercial sex work to avoid Iwe-iroyin and its premises like a plague, warning that defiance by these wanton would not be treated with kid gloves as all legal means shall be explored.

It assured of its commitment at always ensuring proper sanity and getting rid of illegal activities and businesses in and around of its Iwe Irohin House.