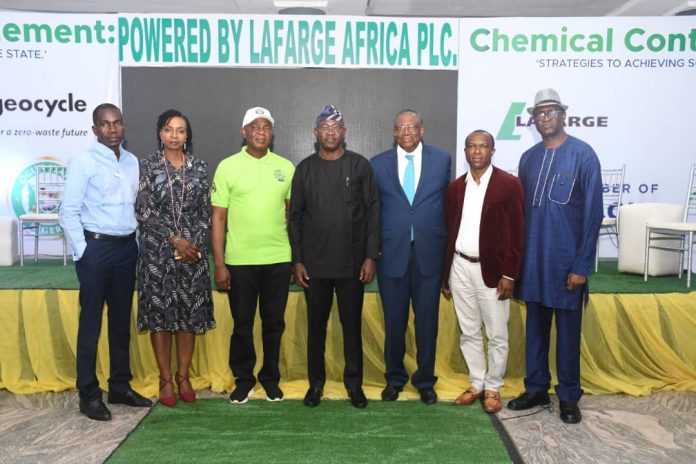 Ogun State Government is synergising with industrial stakeholders especially the chemical handlers and users, to further deepen adherence to environmental safety guidelines in the state .

Gov. Dapo Abiodun revealed this at the maiden edition workshop for Chemical Handlers and Users for Industrial and Commercial facilities in the State, organised by the State Environmental Protection Agency (OGEPA) in Abeokuta on Friday.

The governor noted that the step would help to attain the global Agenda 2030 of Sustainable Development Goals (SDGs) 3 and 6.

Abiodun, represented by the Secretary to State Government, Mr. Tokunbo Talabi said the State being the industrial hub of the nation is susceptible to environmental hazards, thus “the government is taking steps to stem the tide of chemical pollution by re-igniting the responsiveness of industrial and commercial chemical outfits for a sustainable control and management of chemical storage and usage”.

The Governor noted that chemicals were the most critical agent of Nigeria’s Industrial revolution due to its importance to the industrial sector, hence the need for every user and handler to imbibe necessary knowledge on its proper management, calling on stakeholders to contribute their quota in enhancing a livable, safe and healthy environment for the people of the State.

Speaking earlier, Commissioner for Environment, Mr. Ola Oresanya advocated for effective handling, control and management of hazardous chemicals to avoid environmental degradation saying that it is only in good environment that that the industries would flourish and make the state liveable for all.

Oresanya added that the state government is desirous of environment free of any degradation through proper handling of chemicals by its users.

In the lead paper titled “Chemical Identification, Classification and Labeling-Preventive Methods and Control of Chemical Hazards”,a former University of Lagos Deputy Vice-Chancellor, Prof. Babajide Ibitayo Alo said it was important for manufacturers to substitute chemicals with less hazardous ones, modify the usage and dispose them professionally in line with the state’s regulated laws guiding waste management.

Prof.Alo who also enlightened stakeholders on chemical identification, labeling and preventive measures for control of chemical hazards, noted that improper use and exposure to chemicals were dangerous to human health.

On her part, the General Manager, Lagos State Environmental Protection Agency (LASEPA), Dr. Adedolapo Fasawe who spoke on “Best Practices for Sustainable Environmental Management- A Case Study of Lagos State, advised that each state should enact laws to control industrial pollution and wastes in its domain with appropriate deterrent as current punishments in the books for offending industries are not deterrent enough so as to have a better environmental management.

There were also panel discussions on Chemical Storage and Safety as well as Sustainable Waste Management by experts at the workshop.