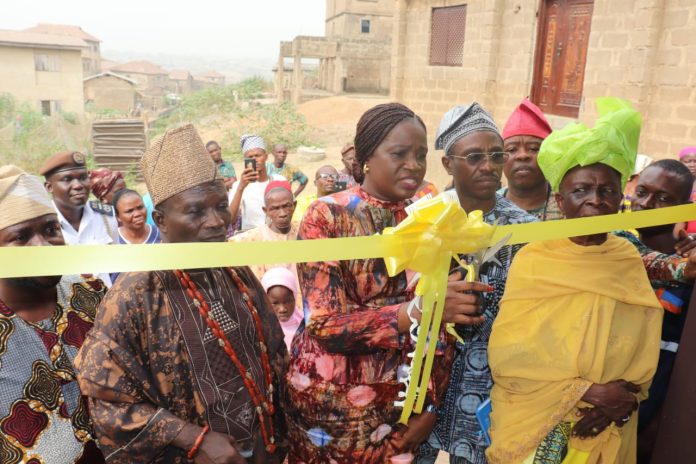 Nigerians have been advised to do all within their means to fight open defecation which has over the years given rise to cases of diarrhoea, cholera, Neglected Tropical Diseases (NTDs) and other public health ailments in communities thereby resulting in avoidable death.

The Ogun State Commissioner for Health, Dr. Tomi Coker gave this admonition at the commisioning of a twin-toilet facility which she facilitated for the Ikeye people of Gbagura in Abeokuta North Local Government alongside her classmates in the School of Policy, Politics and Governance (SPPG).

The donated toilet has two chambers, pumping machine and water sources to ensure hygienic usage of the facility and promote hand washing among it beneficiaries in the community.

Coker said that open defecation has become a menace which every inhabitant in the country should strive against, noting that many children and pregnant women have been sent to early grave as a result of its consequences.

She said that Abeokuta North is prominent for open defecation in the country, hence the reason for her decision with about seven of her coursemates from Public Health Sector in different parts of the world to erect the facility within the Ikeye locality.

“This toilet is not for decoration. It is for the benefits of the people of this community and you are to take ownership of it with all sense of responsibility.

“With this donated toilet, we envisage a reduction in cases of diarrhoea, maternal and infant mortality in this locality. We expect you to wash your hands after defecation by making use of soap and running tap water,” she said.

The Commissioner noted that the essence of human existence is to impact lives and without greed and selfishness, just as she admonished well-meaning individuals to take a cue from the group of students.

Coker who told the residents of the community that the toilet is not for decoration pointed out that they should take full ownership of it with all sense of responsibility.

In his remarks, the Balogun Ijaye Kukudi, Chief Rasak Obe, who represented the Agura of Gbagura, expressed the royal father’s profound gratitude to the Commissioner for Health and her coursemates for the donation, praying to God to grant their desires as well.

The Chairman, Community Development Council, Irewolede Area, Mr. AbdulFatai in his acceptance speech, appreciated the timely donation and assured that residents will not fail to ensure the proper use of the toilet.