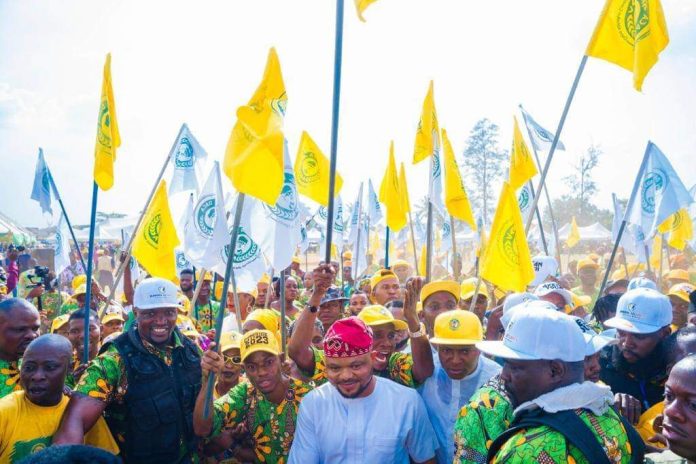 The annual Akesan Day celebrated by kiths and kin of Gov Dapo Abiodun’s country home of Iperu Remo held on Saturday might have come and gone.

However, part of what will remain memorable in the hearts of those who graced the event from far and near was the mammoth crowd mobilised to the venue by Armstrong ‘Tope Akintunde, an indigene of the town and convener of Dapo Abiodun for Second Term Agenda (DACA) who also doubles as Chief Launcher of the event.

The over 25000 members of the political support group rooting for the second term of Gov Dapo Abiodun came from the 20 local governments of Ogun State.

Speaking at the event, Armstrong, a fast rising property merchant who made a handsome donation in support of development of Iperu community declared that Gov Abiodun had done so well with the mandate given to him about four years ago and surely deserve all the support to continue his good works beyond 2023.

He said “aside coming around as a proud indigene of Iperu to join in the celebration of the annual Akesan Day and lend helping hands towards its development, I have also mobilise a fraction of DACA members numbering over 25,000 across the state down here to reassure our hardworking governor, Prince Dapo Abiodun that we are working seriously, leaving no stone unturned to ensure that he is without stress rewarded with another term during March 11, governorship elections of 2023”.

Armstrong also used the medium to urge Nigerians to be concerned with supporting developmental efforts in their various communities saying that “it’s obvious government could not alone shoulder all the responsibilities, all of us as patriotic citizens should be able to partner with the government to make life more easier for all”.

Speaking during the programme, Gov Dapo Abiodun while thanking his kiths and kin for the support so far since becoming the governor in almost four years pledged to remain committed to implementation of projects that will continue to enhance the prosperity of every resident of the Gateway State.

Gov Abiodun highlighted some projects he had done in the town such as Iregun road, Sokoto road, the newly reconstructed market, the ongoing Sagamu-Iperu-Ode-Saapade dual carriage road as well as the Agro-Cargo Airport which he said will provide over 15,000 jobs for the people of Iperu and beyond.

The governor specifically disclosed that the Agro-Cargo Airport will have the first airplane landed on the facility before the end of December.

He has therefore urged people of Iperu to rally support for his second term ambition saying that he was poised to do much more for the people of the community and the state as a whole.

The governor has however frowned at the growing menace of cultism in the town calling on parents to warn their children to stay off such killing venture as anyone caught would be severely dealt with.