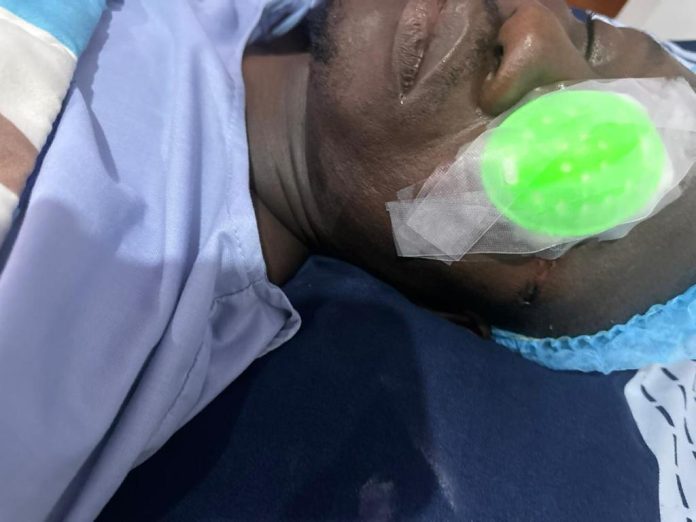 An ordinary day that started just like any other one in the life of Mr. Atanda Muheeb became blurry at about 8. 00 pm around Airforce Base Shasha when an unknown Airforce officer came down from an official car and hit his left eye with a belt.

It all began when a motorcycle collided with Muheeb’s car. He was in the company of two of his coworkers, and they stepped down to assess the damage caused by the rider, which led to a light traffic jam.

Muheeb was heading back to his car when the officer unbuckled his belt and began flogging those at the scene, which led to the injury on his left eye.

The Air Force Officer, alighted from a Peugeot car along side with his colleagues and left the scene immediately after the incident

“My coworkers and I were on our way back from work when a motorcycle hit my car, so I came down to see the damage alongside my coworkers.

The victim said that the first operation was carried out by the Eye Foundation Hospital Group, Isaac John GRA Ikeja and that the doctors said the chances of restoring his sight is probable

“The doctor said the possibility of me seeing with this eye is 50-50. The second operation will be coming up soon, I pray that it is successful and I regain the use of my sight,’’ he said.

An associate of the victim, who spoke anonymously said that the left eye is damaged, but the family is concealing the information from him.

“The left eye is gone, but we are being careful so he doesn’t worry while trying to recuperate,” he said.

According to the diagnosis, the left eye had suffered a Traumatic Globe Rupture.

The incident is currently being investigated by the Nigerian Police Force.