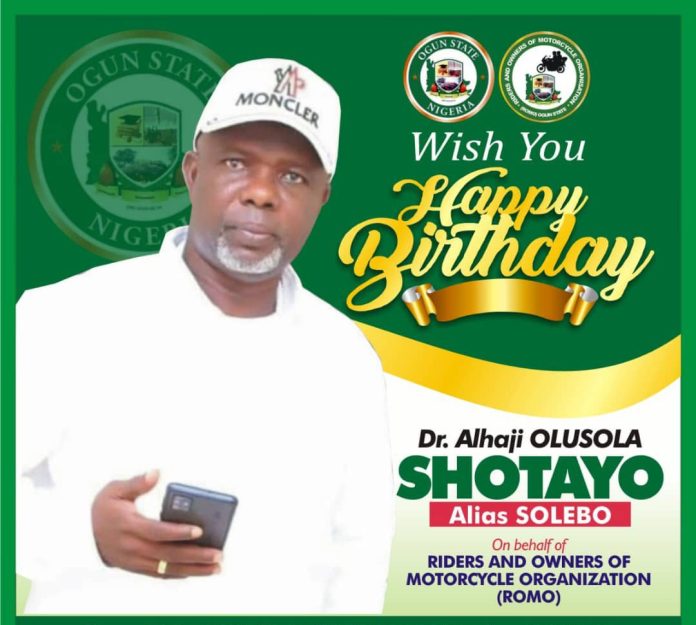 Members of the Riders and Owners of Motorcycles Organisation (ROMO) in Ogun State, friends and well wishers have described the Chairman of the union, Dr.Shotayo Olusola Rasak, popularly known as Sholebo as an outstanding and visionary leader, whose contributions to the socioeconomic development of Ogun State cannot be overemphasized.

This is coming as Sholebo marks another birthday on 24th, December, 2022.

Members of the association, top government officials and other well wishers have been sending their goodwill messages to Sholebo, describing him as an accomplished and selfless leader.

They hailed Sholebo for his unparalleled contributions to the socioeconomic and political development of Ogun State.

This was started in a statement by the ROMO media team.

The team in the statement said, Sholebo is being celebrated for his resounding achievements since the establishment and operation of ROMO three years ago.

The team noted that, Sholebo through his outstanding performance and drive of ROMO as an organization has helped the Governor Dapo Abiodun – led administration in boosting the economic prosperity of the State.

“Our leader, Sholebo, is an embodiment of greatness, a trail blazer and a remarkable archiver who has brought unprecedented development to the transportation sector in the State.

“As you add another year to your days on earth, we join you in sharing in your joy and fulfilment. You are an exemplary leader who has brought development, peace, sanity and tranquillity into the transportation industry in the State.”

“You have no doubt contributed to the overall growth and prosperity of the entire members of ROMO and as you continue to serve our dear State with an uncommon sense of patriotism and unwavering dedication, we give glory to the Almighty God for granting you a life of great accomplishments and abiding fulfillment”.

“We pray that this birthday brings you good health and fortune, resounding joy, unlimited happiness and peace of mind even as you continue to serve ROMO and Ogun State in general. Happy birthday Sir!”