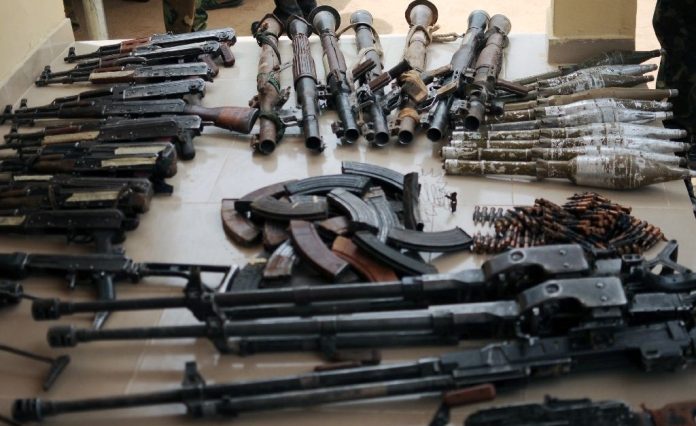 The National Centre for the Control of Small Arms and Light Weapons on Friday disclosed that over 3,000 illegal weapons and firearms have so far been mopped up from illegal custodians of the equipment in Nigeria and destroyed, as the country prepares for 2023 general elections.

The Director of Internal Security and the Zonal Coordinator, National Centre for the Control of Small Arms and Light Weapons, South West Zone, Mr. Sola Akinlade disclosed this at a press conference in Abeokuta saying this is to prevent and control the proliferation of arms in the system.

Mr. Akinlade who explained that the centre is domiciled in the Presidency under the National Security Adviser added that the press conference was imperative to encourage the media in collaborating and to join force with the centre in the fight against the crime.

“The centre’s establishment has since commenced operations by mopping up illicit arms through security agencies especially in the handing over of recovered weapons by the military from ongoing military operations in the North West, North Central and North East to mention just a few”, Akinlade disclosed.

Akinlade called for effective collaboration with the media practitioners towards the eradication of illicit arms currently in wrong hands of political thugs, armed bandits and other unpatriotic and unlicensed citizens, not excluding students in various academic institutions.

The South West Zonal Coordinator also called on the general public to be on alert as some associations have been parading themselves in the public to be controlling arms and have put their members on major roads searching vehicles and confronting individuals, as such activities are illegal and should be reported to law enforcement agencies.

Akinlade emphasized the need for all to be vigilant as political campaigns and rallies have commenced, adding that the use of various forms of small arms and light weapons cannot be ruled out. In this regard, movement of political thugs and other criminals should be under watch and close monitoring with a view to reporting groups or individuals in possession of illicit arms.