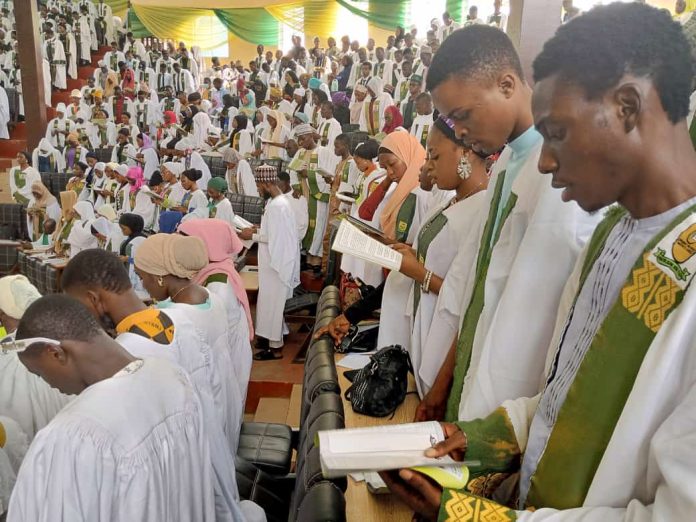 Crescent University Abeokuta has lauded the commitment of Alhaji Aliyu Bature, Wazirin Guzo whose eight children were matriculated alongside over one thousand other fresh students at the institution’s 18th matriculation held on Saturday 14th January 2023.

This was contained in the 18th matriculation address by the Vice Chancellor, Prof. Ibraheem Gbajabiamila when highlighting the achievements of the institution’s products over the years.

Recall that institution which prides itself as citadel of academic and moral excellence was founded by the former judge of the International Court of Justice and one-time Attorney general and Minister of Justice in Nigeria, His Excellency Judge Bola Ajibola who was ably represented by a member of the Board of Trustees, Barr. Adesegun Mahruf Ajibola, SAN.

He referenced Crescent University’s one hundred percent score in the last round of accreditation of all programmes by the National Universities Commission (NUC), a government agency charged with the regulation and quality control of university programmes in Nigeria, and urged parents and stakeholders to always cross-check the authenticity of any information about university programmes with the NUC.

The vice chancellor revealed that more than one thousand students have been admitted for the 2022/2023 academic session into six colleges namely: the Bola Ajibola College of Law (BACOLAW) ,College of Arts ,Social and Management Sciences (CASMAS),College of Health Sciences (COHES),College of Natural and Applied Sciences (CONAS), College of Information and Communication Technology (CICOT) and College of Environmental Sciences (COES).

Prof. Gbajabiamila explained that judge Ajibola had anticipated a day when the university would admit a 50:50 male-female student ratio.

Admonishing the fresh students to say no to cultism, drug abuse, violence, examination malpractice and other vices, the vice chancellor informed parents and other stakeholders that “last year, we expelled six students for commiting various offences against the university “.

Prof. Gbajabiamila also used the occasion to express his gratitude of, on behalf of the board of trustees and governing council to benefactors who gave scholarship awards to deserving students this academic session. They are Judge Bola Ajibola, Rosula Foundation,Chief Bode Mustapha, Ibeji Foundation and Dr (Mrs) Mosun Belo-Olusoga.