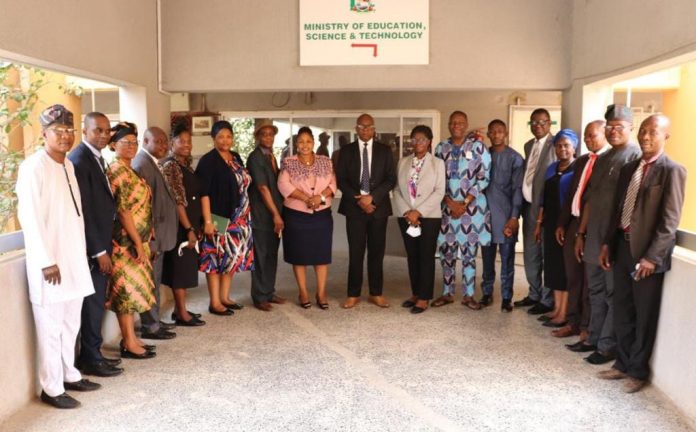 A Diaspora network, Beyond Remittance, has met with Ogun State Government over its plan to adopt Simawa High School in Sagamu Local Government Area of the state.

Simawa High School is one of the schools listed by the state government under its “Adopt A School” policy, which encourages the organised private sector to support rehabilitation of primary and secondary schools in the state.

According to the government, the school which was established in 1980, has 1,397 students and 12 classrooms.

A group of Nigerians based in the US under the aegis of “Beyond Remittance” met with the Commissioner of Education, Science and Technology, Prof Abayomi Arigbadu, last Wednesday, in Abeokuta, to formally intimate the government on the plans to adopt Simiwa High School.

Representatives of the group led by Ms. Bukola Shonuga told Arigbadu and the management of the Ministry that the ‘Beyond Remittance’ Group had developed a detailed proposal on the adoption having carried out its independent research on the school and its needs.

Shonuga, a New York based media practitioner, said lack of access to the officials of the government had delayed the take-off of the group’s plan for the Simawa High School.

She said the group had submitted (via email and hand delivered) a proposal accompanied by a letter of recommendation from the Consulate of New York to Governor Dapo Abiodun’s Office.

According to her, the Beyond Remittance team seeks to transfer knowledge to the younger generation, as part of the members’ resolve to give back to society.

Shonuga said, “The Beyond Remittance concept emerged from the realisation that the billions of dollars in annual remittance by the diaspora contributes substantially to Nigeria’s and helps our families to pay for essential expenses’. But transferring knowledge will be a more powerful way to really help our people and to build a lasting sustainable economy. So, we are really excited to be here to strike this conversation.”

“People in my age bracket, I’m 63 years old, we are in our retirement phase and we have the time and the resources to see how we can help our people.

“We have found out that that particular school has 68 students in one class and one teacher, we found this incredible. We also found that Simawa High School is not the only overcrowded school in Nigeria, that this is the pattern across the public school sector in Nigeria. We are not here to point fingers at the government because that wouldn’t get us anywhere. It is easy to criticize, but it’s more productive to come up with lasting solutions.”

“We have done our research and our intervention approach is designed in phases one, two, three and so on. So, it’s a long term approach.

Shonuga told the commissioner and his team that a larger meeting with the “Beyond Remittance” group members in the US would be held virtually at a later date.

Responding, Arigbabu who received the three-member team during the management meeting of his ministry applauded the Diaspora network for its intention to adopt the school, which according to him, would help drive the revitalization efforts by the government in the education sector.

Arigbabu who was Vice Chancellor of Tai Solarin University of Education (TASUED), Ijagun, Ijebu-Ode, admitted infrastructural decay in the state’s schools, blaming it on previous administrations.

The Commissioner disclosed that Governor Dapo Abiodun had rehabilitated about 900 classrooms in the last three years.

He added that the state’s 42 flagship Secondary Schools have been marked as model schools for its long-term plans on reduction of students to teachers ratio in the classrooms.

According to him, the state strives towards achieving the global benchmark of 40 students to a teacher ratio.

Arigbadu, however, promised the government’s readiness to support the Diaspora group towards implementing its programmes for the school.