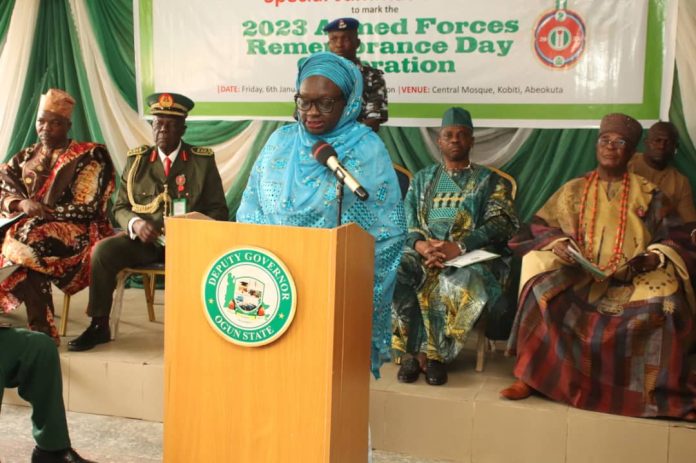 Gov. Dapo Abiodun has charged Nigerians , particularly Ogun state indigenes to work together in ensuring that peace and unity reign across the country.

According to Abiodun, there was a need for everyone to ask himself or herself “why are we allowing divisibility in our unity, noting that a house divided against itself cannot stand”.

Represented by his Deputy Engr. Noimot Salako-Oyedele, the Governor revealed that ‘’if we don’t bridge the chaos, the significance of the labour of our heroes past in promoting peace and unity in Nigeria will be in vain’’, therefore all must live in love.

Gov. Abiodun encouraged citizens to exercise their franchise by coming out enmasse to vote in the forthcoming general elections , saying it remained one of the ways to promote the growth and development of the nation.

While praying for the continued protection of the uniform men who are at the forefront of the fight against insecurity in Nigeria, he said no stone will be left unturned in ensuring the security of lives and property of the people of the State assuring that he would continue to work assiduously with the security operatives in State.

Picking his sermon from the Holy Quran 22 verse 58, Mufasir of Egbaland, Dr. Taofeek Amolegbe, said no one on earth can be more committed and dedicated to duties than the fallen heroes who laid their lives so that others can live in peace, adding that the labour of our heroes past must not go in vain.

Also speaking, the Alake and paramount ruler of Egbaland, HRM Oba Adedotun Aremu Gbadebo, urged Nigerians to always remember the fallen heroes in prayers, because their laid down their lives for the country due to their love and passion for it, praying that the labour of those in service will not be in vain.

Earlier in his welcome address, the Ogun State Head of Service, Dr. Nofiu Aigoro, said the Jumat service became imperative as a way of remembering and honouring the labours of past heroes, urging the government and well-meaning Nigerians to always support the families of the fallen heroes through prayers as well as support them morally and financially.
Highlight of the Jumat Service was reading from the holy Quran and special prayers for Governor Dapo Abiodun, Ogun State and Nigeria as a whole.