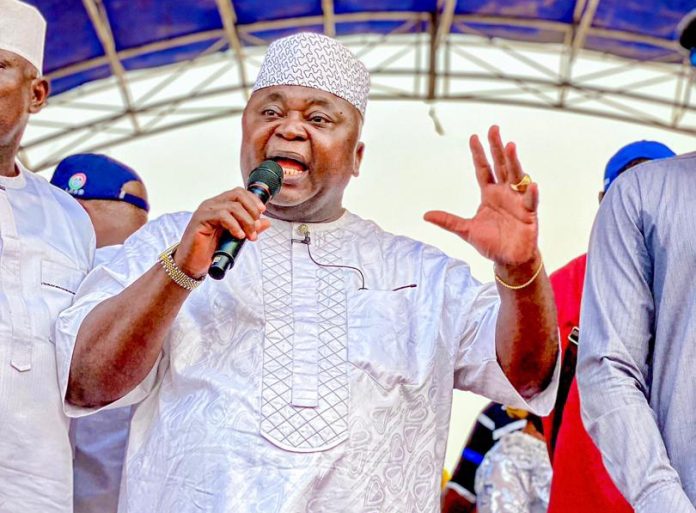 The governorship candidate of the Peoples Democratic Party (PDP) in Ogun state, Hon. Ladi Adebutu has unveiled his urban renewal plan targeted at giving the state a facelift if voted as the governor of the state.

This, Adebutu said would be done through the creation of an Urban Development Authority by his administration to change the landscape of the state to meet international standards.

Adebutu disclosed this on Thursday while addressing thousands of PDP supporters at Ifo Local government area of the state during his campaign tour to the area.

Adebutu had a brief stop at Ojodun-Abiodun and Ajuwon-Akute, border communities between Ogun and Lagos where he had separate meetings with leaders of various Community Development Associations (CDAs) and other members of the communities

He said, the urban renewal plan is part of his seven-point agenda aimed at repositioning the state.

The PDP governorship said, only proper and regulated urban renewal in the state would attract more investors to the state.

Adebutu, who represented Sagamu, Ikenne and Remo North Federal constituency at the National Assembly between 2015 and 2019 also disclosed that, his administration would focus more on the development of border communities.

He also pledged to return local government administration to the people, saying “Once we have local government autonomy, there will be development at the grassroots level, you will have the opportunity to participate in government and your needs will be promptly attended to”.

Adebutu berated the Dapo Abiodun – led All Progressives Congress (APC) of crippling local government administration which according to him has stifled development at the grassroots level.

His words: “We need urban renewal in this state, particularly at the border areas. If voted into power, our administration will create urban development authority to address this.

“The border communities, especially the ones between Lagos and Ogun state have suffered for far too long due to years of neglect by previous administrations.

“Governments in the past have abandoned communities in boarder areas. The communities have been deprived of social amenities and many of the residents there don’t even know where they belong.

“But my administration will prioritise development in border communities, we will give them a sense of belonging.

“We are going to do this through the creation of border area development authority. This will address the challenges of the residents of border communities.”

The high-point of the tour was the distribution of transformers to communities in Ifo loca government area.

Several items such as: motorcycles, generators, laptops and cash prizes were also given to the people of the area.