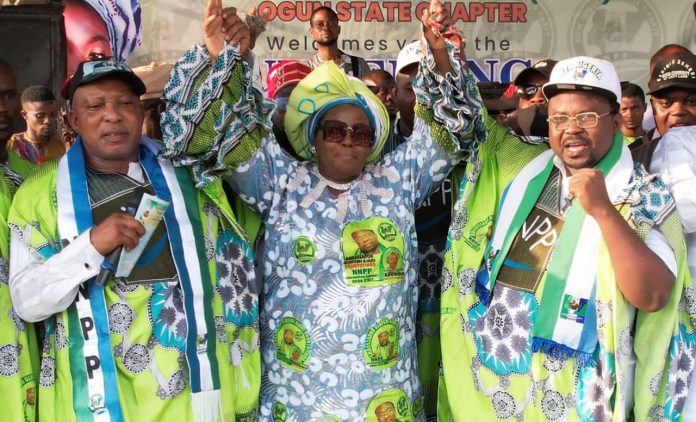 The New Nigeria People’s Party (NNPP) in Ogun has vowed to take over the leadership of the state in the 2023 governorship election.

Olaposi Oginni, the State Chairman of NNPP, stated this on Wednesday in Abeokuta during the unveiling of Alhaja Shakirat Arowolo as the Deputy Governorship candidate of the party.

Oginni described Arowolo’s choice as a round peg in the round hole, saying her emergence would enhance women participation in governance.

He also added that the choice of a female running mate has proven that NNPP is gender sensitive and unbiased.

He also stated that the party would be fielding candidates for all positions, saying NNPP was ready to take over Ogun state.

” Other party’s are going no where, the All Progressives Congress (APC) has destroyed the economy of the country and the state at large.

” Petrol price has increased. Incessant kidnapping,
Ogun has never had it so bad.

“We are stopping kidnapping
There will be peace, Ogun will be safe . Security is paramount in our programme

“We will be at the stadium May 29 to swear in NNPP candidate as governor of the state,” he said.

Responding, Arowolo promised that she would ensure that all women were empowered in there administration.

She said “I thank NNPP for believing in me and I promise that I will never let you down.

“All women, it’s time to speak out.

She promised that the administration would put an end to high rate of maternal and child mortality in the state.